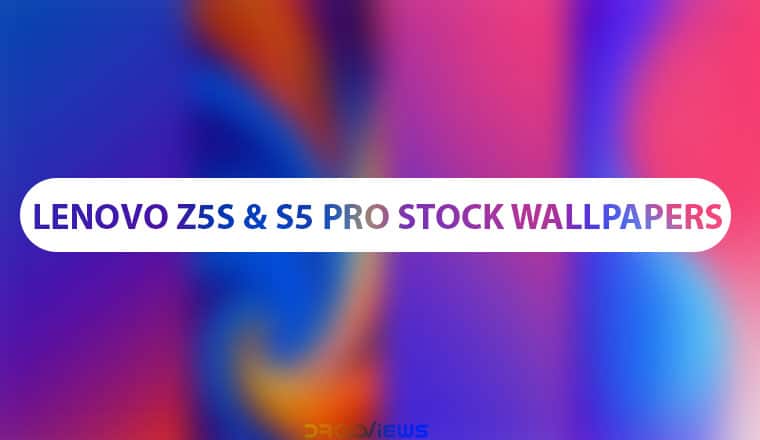 Today, we have the stock wallpapers from the 2 newly released Lenovo devices. Download Lenovo Z5s and Lenovo S5 Pro wallpapers from below in 1080 x 2340/2246 px resolution with 19:9 aspect ratio. You can get the 4 Full HD+ wallpapers individually or in a zip from below.

Lenovo S5 Pro was released back in October 2018 while the Lenovo Z5s was released in December 2018. Both the devices are mid-range options from Lenovo but both of them are built as a premium flagship device. There are quite a few differences between the two devices and that doesn’t carry over to the included stock wallpapers with both the devices. We have the Lenovo Z5s and Lenovo S5 Pro wallpapers available here for download.

In terms of the look and feel, both the devices are built using premium materials. There’s glass on both sides surrounded by a metal chassis and a rear-mounted fingerprint scanner on the back. The camera setup is vertically aligned towards the left side of the devices and both of them have a notch in the display. Those are all the similarities between the devices in terms of design.  The Lenovo Z5s is the sleeker looking of the two devices with a near bezel-less display and a tiny water-drop notch.

The S5 Pro has a larger iPhone-like notch and a significant bottom chin. The Lenovo branding is placed at the bottom-left aligned vertically. All the buttons are on the right and there’s also a headphone jack on both the devices.

The Lenovo Z5s is a Dual-SIM smartphone that accepts two Nano-SIMs. It sports a 6.3 inch IPS LCD display with a resolution of 1080 pixels by 2340 pixels. This results in an aspect ratio of 19.5:9, a pixel per inch count of 409 and a screen to body ratio of 83.5%. Qualcomm Snapdragon 710 SoC sits under the display which is an Octa-core processor with 2.2 GHz Kryo 260 cores. The SoC is paired with either 4GB or 6 GB of RAM and 64GB or 128GB of storage. The storage is expandable up to 256GB via a microSD card.

It runs Android 9.0 Pie out of the box with ZUI 10 running on top of it. The device packs in a 16-megapixel (f/1.8) primary camera and an 8-megapixel secondary camera on the rear. The tiny water-drop notch in the front houses a 16-megapixel front shooter for selfies. The entire set up is powered by a 3300 mAh battery.

Lenovo S5 Pro is also a Dual-SIM smartphone that accepts two Nano-SIMs. The display is slightly smaller thanks to a bigger notch at 6.20 inches with a resolution of 1080 pixels by 2246 pixels. This pegs the aspect ratio at a slightly less tall 18.7:9 with a pixel density of 402 pixels per inch. The S5 Pro is powered by a Qualcomm Snapdragon 636 supported with 6GB of RAM and 64 GB or 128 GB of internal storage. It’s expandable up to 256GB via a microSD card like the Z5s.

It runs Android 8.1 Oreo out of the box with ZUI 5 running on top. The rear-mounted camera set-up on the back is stronger than the Z5s in terms of the megapixels count with a 20-megapixel (f/1.8) primary camera and a 12-megapixel (f/2.6) secondary camera. There is no third camera sensor here. We all know, of course, that this isn’t indicative of the actual performance being better or worse. Although with a high megapixel count the device should take more detailed images in ample lighting conditions.

There is also a dual camera set-up on the front allowed by the larger notch. The notch in the front houses a 20-megapixel (f/2.2) primary camera and an 8-megapixel secondary camera for selfies. A 3500mAh battery is used to provide the required power.

There are four stock wallpapers in total included in the pack below. The wallpapers from the respective devices share the same resolution as the device they’re from. That is, two of the wallpapers that are from the Lenovo Z5s have a resolution of 1080 pixels by 2340 pixels.

The Lenovo S5 Pro stock wallpapers, on the other hand,  have a resolution of 1080 pixels by 2246 pixels. We’ve uploaded the wallpapers below. You can also download all the wallpapers at once as a single zip file from the link provided below.