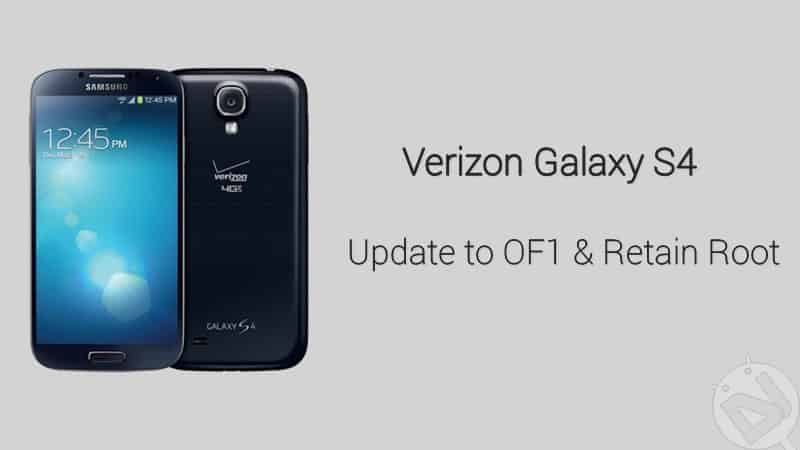 Samsung Galaxy S4 is a bit older device and most of the user might have already switched to the latest flagship devices. However, Samsung and Verizon still seem to support this device by releasing OTA updates. The latest update comes with the software version “I545VRUGOF1” and brings many bug fixes to the device, the most important bug fix being the “Stagefright bug fix.” If you haven’t already heard, Stagefright is the most dreaded bug in Android which left billions of Android device vulnerable to the mercy of hackers. Luckily, Samsung Galaxy S4 users get the bug fix sooner than expected. Below is the detailed changelog:

However, most rooted users take a step back on updates because the root will be lost once the firmware is flashed. But muniz_ri of XDA has shared a simple procedure to flash the latest firmware on your Verizon Galaxy S4 without losing the root. You can update to the OF1 firmware on your Verizon S4 using a tool called Flashfire developed by Chainfire, the wonder developer of SuperSu. The Fireflash app is a new mobile flash tool which has the capability to flash a stock firmware OTA directly from your device.

So, without any further ado, let’s see how to update Verizon Galaxy S4 to OF1 firmware without losing root.

This tutorial is only meant for Verizon Galaxy S4 with the model number SCH-I545, don’t try this on any other variant of Galaxy S4. Flashing firmware is considered risky and might brick your device in extreme cases, so follow the procedure carefully to avoid any hassles. We are not responsible for any damages to your device during the process, so proceed at your own risk.

Note: After the reboot, you’ll be stuck on Verizon logo for about 5 minutes for odexed ROM or about 10-15 minutes for Deodexed ROM. Be patient while the system is booting and don’t turn off your device during the boot process.

Let us know if you have any issues during the installation process.