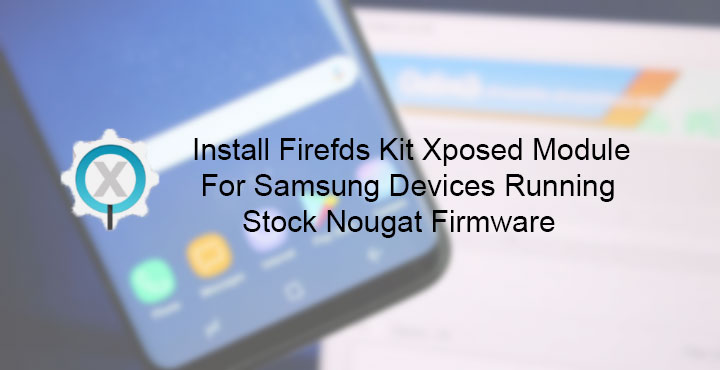 In case you haven’t heard, Xposed Framework for Android Nougat is finally here with all the bells and whistles you’d expect. A lot of Xposed modules are being updated to support Android Nougat as a result. Similarly, a number of new modules have also popped up in the Xposed repository. Once such module is Firefds Kit by firefds which is a modified version of wanam‘s XTouchwiz module. XTouchwiz itself being a simpler, modified version of Wanam‘s previous Wanam Xposed module. Why all the modified versions? Read on.

Samsung’s Android skin, TouchWiz is almost as well known as the Galaxy brand itself, not always for the right reasons. Yes, it is no longer called TouchWiz but who are we kidding, right? Let’s call a spade a spade. And I don’t necessarily mean that in a bad way. TouchWiz is a heavily modified Android skin, but luckily, that has never been an issue for Xposed Framework. Yet, most of its modules are designed to work with the stock AOSP or similar ROMs. Things were quite the opposite with Wanam Xposed module which was specifically made for Samsung devices running the TouchWiz skin.

It was discontinued as the module crumbled under its own weight. It offered a ton of features and it was a must have if you had a rooted TouchWiz device with Xposed Framework installed. But with a ton of features comes the responsibility of updating them as and how newer versions of Android come around. All that while making sure the module is compatible across all TouchWiz devices which can prove to be a daunting task. Therefore, the developer decided to cut back on all the fancy features and create a new module from scratch, called XTouchwiz. It has only the basic features of Wanam Xposed and is thus easier to maintain and update.

How to install Firefds Kit

Read Next 10 Best Xposed Modules You Should Try Right Now