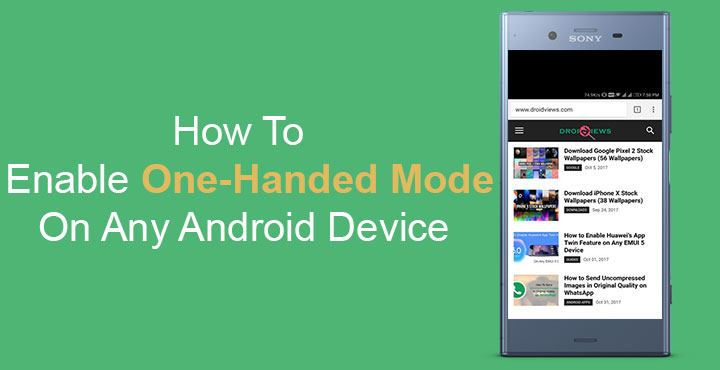 Just over a decade ago, it was considered that the smaller a mobile device is the better. This was especially true for phones at the time. But now with the advent of smartphones, the trend has taken a 180-degree turn. The primary cause being the increasing content consumption on mobile devices thanks to the Internet and a myriad of Internet-based services. There was a time when devices with a 5 inch plus display were called phablets and looked huge. Today it is hard to find a smartphone smaller than that. In fact, most devices today have a 5.5-inch display. One handed use has really suffered. Many manufacturers like Apple, Samsung, Huawei, LG have tackled the problem with different implementations of the one-handed mode. But devices like the Google Pixel 2 XL and many others still don’t have any such thing.

That is why the folks over at XDA have been working on an app they simply call One-Handed Mode. The app adds a floating button on the edge of your device’s display. You can tap this button anytime to pull the display downwards. This makes it easier to reach things like the status bar, the app toolbar at the top of your notification tray. The implementation is pretty much like Apple’s except the way One-Handed Mode gets triggered. The said bubble can be moved around anywhere on the screen by long pressing and dragging. It can also be dismissed anytime should you decide you no longer want it on the screen.

One-Handed Mode does not require Xposed Framework or even root access. XDA claims this is the only app on the Play Store currently that allows you to do this.

XDA says that the app will cost you $0.99 for the first week. After which the price will be raised to $1.99. If you’d really like to use One-Handed mode on your device, it is best to buy the app right away while it costs half the price. You can install the app for free though in order to test it first.

As a general rule of thumb, most of the times when an app attempts to do something that other apps can’t do without root, you’re going to have to do some typing. Before you can start using One-Handed Mode, the app requires the permission to WRITE_SECURE_SETTINGS. Granting the permission requires you to have a rooted device. Alternatively, you can use ADB to grant the said permission too. Here’s how you can do it.

Also see: How to Get 3D Stereo Sound Effect on Any Android

Once that is done, you can disconnect your phone from the PC and launch the app. Swipe through the introductory pages and you’ll be able to access the app’s main screen. It is a pretty simple app with a handful of settings which is good considering it only has one job to do.

Most of the settings are quite self-explanatory and those that do not have their explanations write under them. That’s what happens when all things are considered while designing an app. Yet, if you’re in doubt about any of the settings, you can check out the source link below. When you toggle on the Enable OHM Service option on the main page, you’ll be asked to pay for the app. You can choose to simply hit the back button and not pay.

Also see: How to Freeze Background Apps on Android Nougat and Above Without Root

The app is only free to test which is why you won’t be able to access some of the settings. The floating bubble on the edge of the screen also won’t work. You can only test that the app works by tapping the OFF/ON button at the bottom.