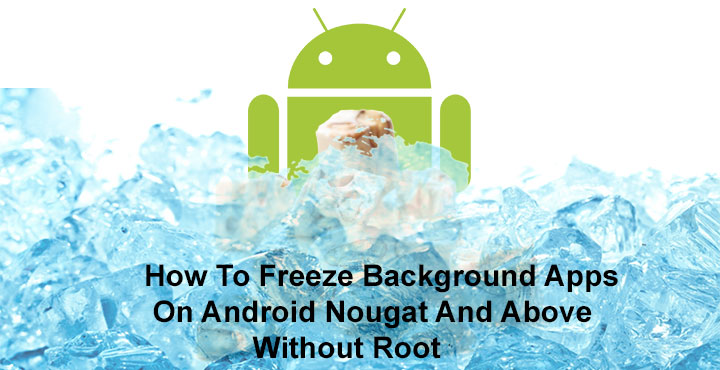 Even though Apple refers to iOS as “the most advanced” mobile OS, the reality couldn’t be far from it. Sure it’s quite advanced, but compared to Android, it’s always going to be the less advanced OS. The reason behind that is simply based on the philosophy of both the platforms which couldn’t be more different. Android, unlike the competition, offers much more freedom to third-party apps which results in some really innovative approaches. Something like Tasker would never be possible on iOS. Android apps can do more tasks while running in the background. While that gives Android an edge over iOS, it also results in more battery drain. Luckily, you can disable or freeze background apps on Android Nougat without root. Although it does require a bit of know how. The whole drill has been discovered and described in detail by dosangst on Reddit.

When you install a ton of apps knowing how they might affect your battery, running in the background because you like the features they offer in return, it’s a different story. But when you end up facing battery drain because of a poorly optimized app’s background processes, that’s when it becomes problematic. Google has been cracking down on the freedom provided to the apps in the background and with Android O, the restrictions are only going to be tighter. But it is quite unlikely that a majority of devices will ever see Android 8.0.

Don’t miss: Save Battery and RAM by Stopping Apps Running in Background

But if your device is currently running on Android Nougat, you don’t have to wait around for Android O. At least, not for the battery saving features. There’s a simple trick that will prevent an app from ever running in the background. While it does not require root or a third-party application, that route probably would have been much easier for many of you. But if you’re comfortable using ADB commands you’ll feel right at home. Using a couple of commands you can block apps like Facebook and Snapchat from draining your battery in the background. You should also note that this means you won’t be getting any notifications from the apps as well since they won’t be syncing for them in the background anymore. Other than that, the apps will continue to work as they’re supposed to.

This method is more powerful than say, using Greenify or any other similar app since, without root, the functionality of such apps is greatly limited.

Must read: How to Speed Up Lagging Android Devices