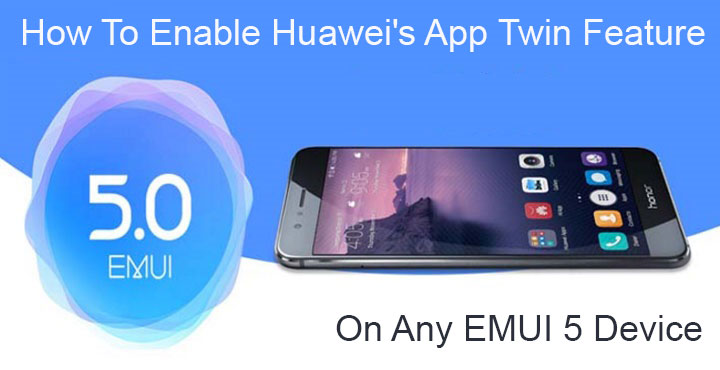 With the number of dual SIM devices on the rise, at least on this side of the world, there are certain problems that arise. Most apps, especially messenger apps designed to work with phone numbers, are made for single SIM devices. As such, you can only log in one account on WhatsApp, Viber, etc. If you happen to have a dual SIM device you can only use services like WhatsApp with one of them. For this very reason, several OEMs like Xiaomi and Huawei are now including features that allow users to run two separate instances of an app on the same device. We’ve already seen how to enable it on Xiaomi devices. Today we’ll see how to enable Huawei’s App Twin on any EMUI 5 device since Huawei has apparently disabled it on some.

This is something other users can also do via third-party Play Store apps like PrivateMe, App Cloner, Parallel Space, etc. But most of these apps are simply too bloated and eat up a lot of resources in the background. Moreover, many newer Huawei smartphones already have the App Twin feature. It might seem like a waste of space and resources to add another app to do the same thing.

Now if you’ve ever been to the App Twin settings, you know the options are pretty limited. If you live outside China, the only options available are Facebook, its companion Messenger, and Facebook-owned WhatsApp. Chinese models can clone QQ and WeChat. It’s like they don’t even care and they just put it in there for the sake of it. Which is rather odd because Huawei decided to put this feature right out in the Settings instead of hiding it in Apps or Advanced Settings or something else. This shows that they must want people to use it. Even older phones that were updated to EMUI 5 have the feature. For some reason though, Huawei chose to disable it for these and some other phones.

Installing a third-party app to do the same thing does start to make sense now, doesn’t it? Especially when you consider that apps like Island and Parallel Space provide much more compatibility with apps across the board. But if Facebook, Messenger, or WhatsApp are the only apps you want to clone, there’s nothing better than EMUI’s App Twin for Huawei phones because it is built-in. Luckily, XDA Senior Member shashank1320 figured out a way to enable App Twin on any phone running EMUI 5.

How to enable App Twin

Enabling App Twin will require root access because the method involves making changes to the local.prop file. The file is found in the /system/emui/lite/prop/ folder. Therefore, go to the said folder using your favorite file explorer and find the file named local.prop. It would be a good idea to back up the file before you play around with it. The best way to do that would be to copy the file and paste it somewhere, then rename it as local.prop.bak (or anything else you fancy). Then move the file back to its original directory.

Now that that’s out of the way, open local.prop in a text editor. Most file managers come with a built-in text editor but if you have another text-editor installed you can open the file in that as well. The choice of text editor doesn’t really matter. Find the lines mentioned below.

Make the changes mentioned in the brackets so that the lines now look as shown below.

Now save the changes you’ve made and reboot your device. When your device comes back up you should find App Twin under Settings.

Save the file and reboot your device. You should now be able to see App Twin in Settings.