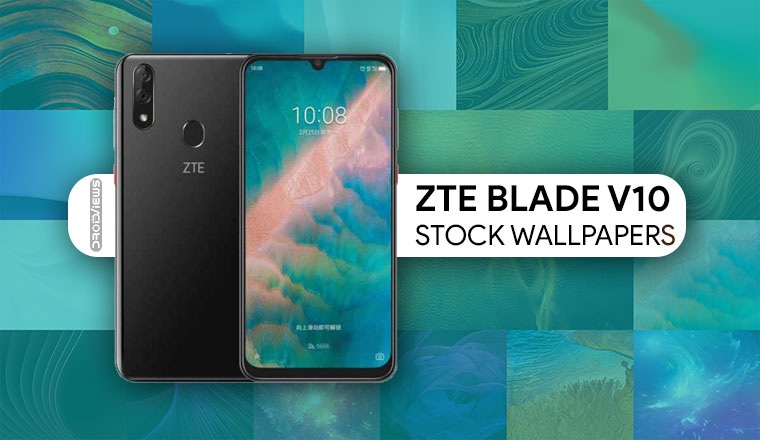 The ZTE Blade V10 wallpapers pack has 18 stock wallpapers all of which have the same resolution as the device’s display. That is 1080 pixels by 2280 pixels, which means they’re all full HD+. We’ve attached a few wallpaper images below for demonstration but these are compressed JPEGs, although they’re still very high quality. We have packed all of the eighteen wallpapers in a single, easy-to-download zip file. The link to it has been provided below the images.

The Blade lineup is a budget-oriented series of smartphones from the Chinese manufacturer. The ZTE Blade V10 is the successor to last year’s ZTE Blade V9.

From a design perspective, the ZTE Blade V10 is a nice evolution over the previous ZTE Blade V9. Well, as long as you don’t mind the notch. The ZTE Blade V9 didn’t have one but it had thicker bezels on both the top and bottom. The glass back comes in black, green and a twilight-like dual-color design that is hard to not notice. The device looks like it could be ZTE Axon Pro 10 5G’s smaller sibling.  It has a USB Type C charging port as well as a headphone jack. The SIM tray takes either two nano-SIMs or a nano-SIM and a microSD card.

There’s a fingerprint scanner at the back right above the ZTE logo. The power button has an accent color like the power button on Google Pixel devices so that’s nice to have.

It features a 6.3-inch display with a resolution of 1080 pixels by 2280 pixels at an aspect ratio of 19:9. There are exactly 400 pixels per inch of the display and it all amounts up to a screen-to-body ratio of 82.7% which is nothing impressive but it’s not a flagship device either. It’s an IPS LCD capacitive touchscreen capable of producing 16 million colors.

You’d expect to know the processor powering an Android phone that you buy. Strangely enough, though, the CPU on the chip is not known although it seems to be an octa-core Qualcomm SoC. Whichever processor is used, there is at least 3GB of RAM to help the processor out with 32GB internal storage. Another variant with 4GB of RAM and 64GB of storage is also available. There’s a microSD slot which supports external storage up to 256GB and also acts as a secondary SIM slot.

The battery is, by today’s standards, a meager 3200mAh. It is non-removable (surprise surprise) and it does not support fast charging at all. Some variants of the device, depending on the market, also contain NFC.

On the front is a 32 MP camera sensor with a pixel size of 0.8 µm, housed in the water-drop notch. This camera is apparently augmented by ‘Smart Selfie’ AI technology, which will apparently compensate for low light scenes by detecting and adjusting the settings accordingly. The dual rear camera setup consists of a 16 MP sensor with an f/1.8 lens and a pixel size of 1.12 µm.

It supports PDAF, panorama and HDR shots. The second is a 5 MP, f/2.4 depth sensor. A dual-tone dual LED flash is there to assist the cameras under low light environments. Both the front and the rear cameras are capable of recording video up to 1080p at 30 fps.

On the software side of things, the ZTE Blade V9 ships with Android 9.0 Pie out of the box. The units sold in China run ZTE’s MiFavor 9.0 skin on top. However, for the global variants, ZTE has decided to go with stock Android. There are still a couple of ZTE apps though, which were necessary, like the camera app.