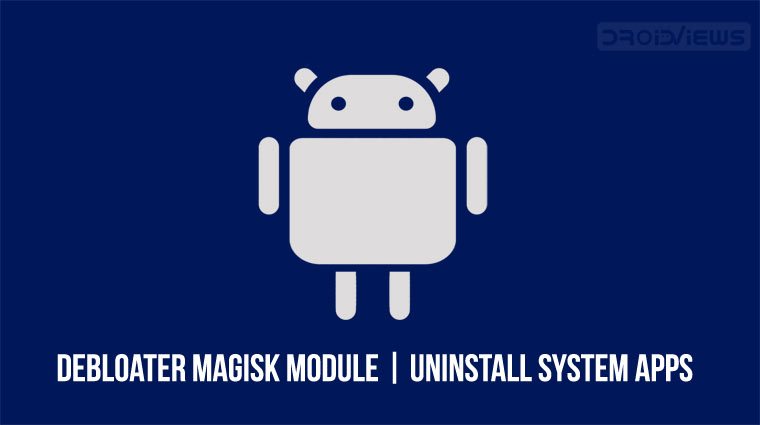 Nearly all Android phones come with useless software pre-installed by manufacturers or carriers. Even Nexus devices are preloaded with many Google-created apps which if you don’t use, are simply bloatware. The situation has been improving over time with OEMs pushing in less and less bloat. However, bloatware is still a reality. If you have a rooted Android device though, a nifty little Debloater Magisk module is probably the easiest way to uninstall bloatware and remove system apps.

We’ve previously discussed the various ways bloatware or system apps can be uninstalled on Android devices without root. This generally is a multi-step process requiring the use of a PC and ADB. It has always been easier for rooted devices. Simply fire up your root capable File explorer, find the APK in the /system/app/ or /system/priv-app/ folders and remove system apps by deleting them. The Magisk Module we’re discussing today makes it even easier, arguably. Once installed, all you have to do is type a tiny command in a Terminal app, select the kind of apps you want to uninstall and you will be presented with a list of all the apps.

This is easier than scrolling through a nearly endless list in the file explorer to remove system apps. Admittedly, not everyone is a fan of using the command-line and would rather find it easier to use a GUI. But if you find typing easier than navigating a GUI, you’ll love this Debloater Magisk module.

Before we install the actual Debloater Magisk module though, let’s install Busybox because it’s required for the module to work. Fortunately, Busybox is also available as a Magisk module which is super easy to install.

Similarly, as before, you can find and install the Debloater Magisk module. If you’ve followed the steps above exactly, you should now be in the Downloads section of Magisk Manager.

One downside of the Debloater Magisk module, if you want to call it that, is that it doesn’t have a UI. If you want to use it you’ll need to install a Terminal app which lets you execute terminal commands. It doesn’t matter which Terminal app you use so you can use anything you like. We’ve linked some of the popular Terminal apps that you can install from the Play Store for free.

When you launch the Debloater Magisk module, you’ll be presented with multiple options to pick from. These are System Apps, System Priv-Apps, Vendor Apps, Enter Custom System Apps dir, and Import Config (/cache/import-debloat.txt). Because we’re interested in removing bloatware you only have to be concerned with the first three choices. For instance, type ‘1‘ and hit Enter to uninstall one of the system apps installed on your device.

The Debloater Magisk module will then scan the system for all the installed apps and present you with a list. Find the app or apps you want to get rid of and make note of the number next to them. To uninstall an app, just type its number and hit Enter. For example, to uninstall the YouTube app, as per the screenshot above, you’d have to type 99 and hit Enter. To uninstall multiple apps at once, enter multiple numbers separated by a space inside inverted commas. For example, as you can see in the screenshots above, to uninstall the apps associated with the numbers 42 and 43, you’d have to type “42 43” and hit enter.