If there is a game that has been replicated again and again over the years with minor tweaks then it has to be the famous brick-breaking game by Atari which was launched in 1976. What players had to do is just smash the bricks using a ball and a paddle. A lot of developers have copied this game and have tried to give it their own unique twist. I shared one such game back in November, it's called Grey Cubes. Today I have another game from the famous brick-breaking genre and it is probably the best game of its kind. It's called Brickies.

Brickies, a collaboration between Noodlecake Studios and Ink Vial Games, is quite similar yet different from other brick-breakers. For starters, it has two paddles instead of one. One paddle is at the bottom and one is at the top. You control these paddles by swiping your fingers on the screen. Both the paddles move simultaneously. It has 5 level packs and each pack have 60 levels. Tapping the screen releases the ball from the paddle and the game begins. Like other brick-breakers, you do not lose a life when you miss the ball. Instead, the ball loses its ability to smash the bricks. The ability can be regained when it touches the paddle again. The background consists of a countdown clock and if it runs out of time before all the bricks are smashed, you lose. There are various kinds of bricks to be smashed. They have different shapes and have different arrangements. Some bricks can be smashed with just one hit, some require two hits, or some require to be hit from a specific side.

Power-ups have been an important part of all the brick-breakers and this one is no different. Brickies have some amazing power-ups like an explosive ball, multiple balls, "cut-through" ball, one power-up lets you control the movement of the ball for a short period of time, etc. You can combine these powers to make the game more interesting. These power-ups disappear after some time so you better collect them while you can. To keep the game fresh it also has an endless mode. In endless mode, there is no time limit and infinite bricks. Brickies has become one of my all time favourite game and is an impressive take on the brick-breaker game. Have you played Brickies yet? What is your favourite brick-breaking game? Share your thoughts with is in the comments section below! 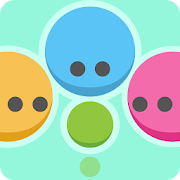