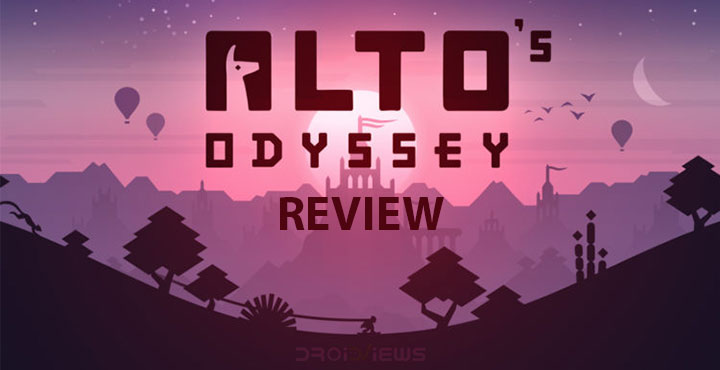 You’ve probably played or at least heard of the game Alto’s Adventures. The Android version was developed by Noodlecake Studios Inc and went on to earn rave reviews and many awards. The developers have now come forth with another installment of the beautiful game which is now called Alto’s Odyssey. It has been available for iOS for six months now but the game has finally made it onto Android. While it has been a long wait, it wasn’t as long as the first time around. Android users had to wait a full year for Alto’s Adventures.

Unlike the $4.99 iOS release though the Android version is free but supported with ads. If you want you can get rid of the ads with a one-time payment.  This is a more Android-friendly approach and in the right way. We’ve all seen some apps we love that are free but ad-supported. You want to pay up and remove ads but there’s no option. This revenue model itself earns some points from me since it gives users a choice while also making sure the developers are paid.

Alto’s Odyssey is not much of a departure from the previous game as you can very well guess from the name. That’s not necessarily a bad thing though, not in this case at least. Both Alto’s Adventures and Alto’s Odyssey are ’endless runner‘ style of games, where you ski down a slope and perform jumps and wall slides, while collecting coins, completing objectives and seeing how far you can go before falling. Not everything is the same though because it’s now Odyssey, not Adventures. 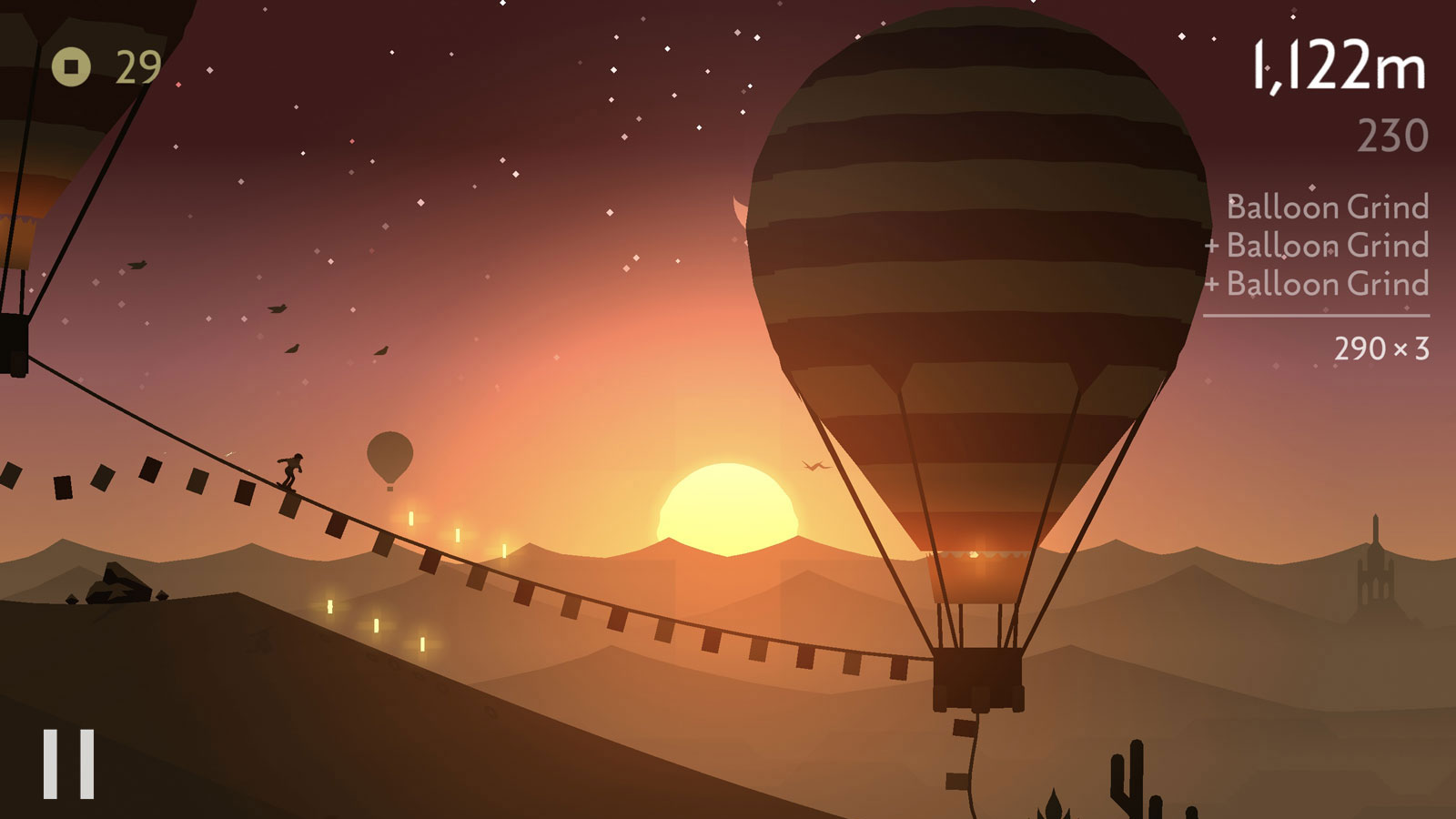 As you progress through the level you encounter hot air balloons, waterfalls, temples, and more. The good part is many of these items are interactive and not just there for the sake of being there. For instance, you can jump off hot air balloons to gain more airtime and thus more points. Then there are walls that you can skate on and water, which also lets you bounce off and get extra speed while sliding. Occasionally you’ll also find whirlwinds that’ll push you up in the air. 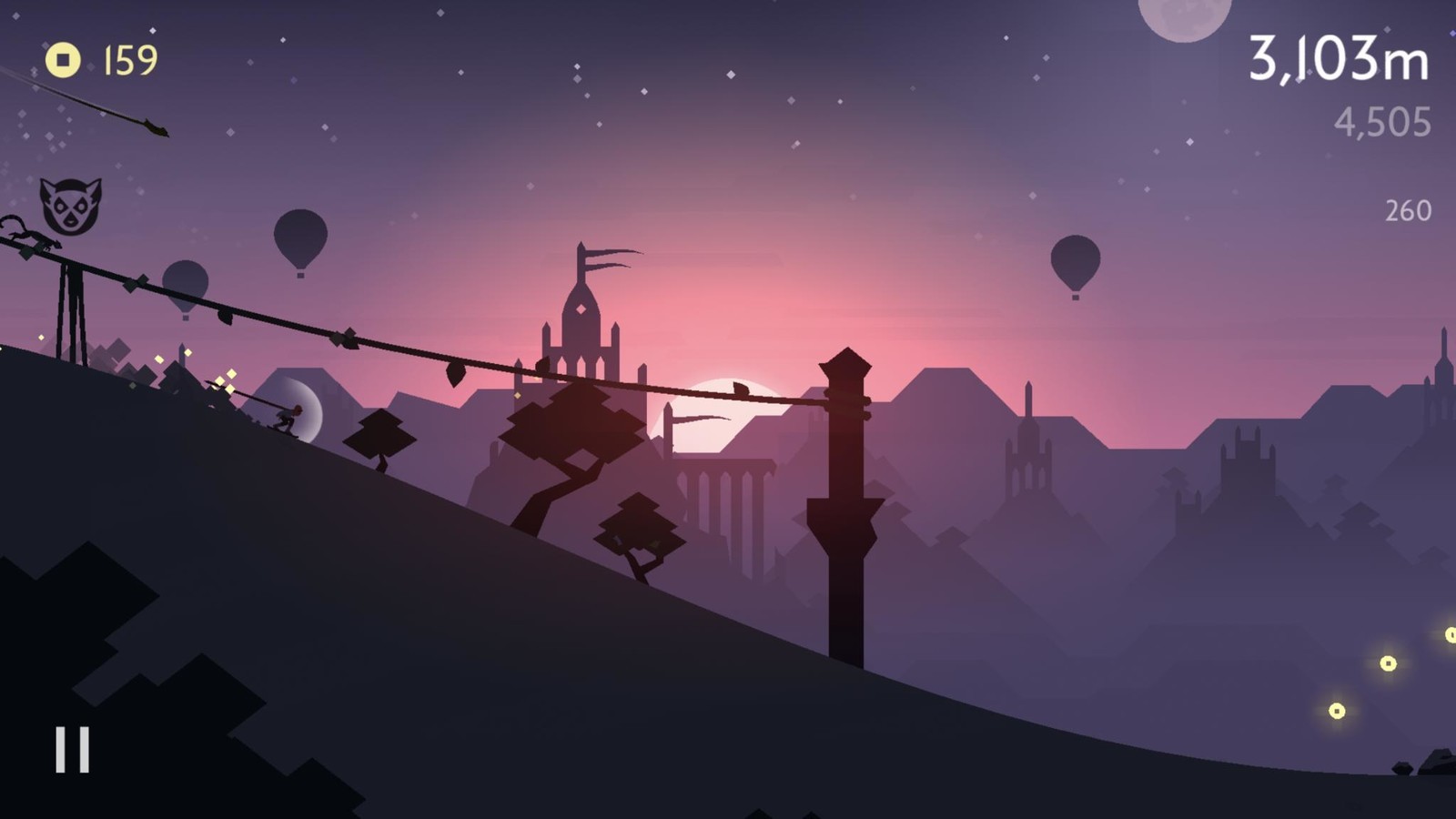 There are many such interesting additions over Alto’s Adventures which add a bit more depth to the game. Oh, and the angry man chasing you in the previous game is now gone. You’ll now be chased by an angry lemur and it’s hard to say which is scarier. Odyssey also includes the Zen mode which was added to the previous game on public demand. Basically, it just lets you play without any score or deaths, so you can play without any distractions.

Despite the one button mechanic the game never feels overly simplistic or boring. It’s so easy to play and still challenging.

Alto’s Adventures had Alto snowboarding down the side of a mountain to gather up his escaped llamas. The new game brings three separate biomes, each with their own unique scenery. You start the game sandboarding down desert slopes.  Alto’s Odyssey really isn’t a game that’s trying to look or feel realistic. The graphic design on this game is more like art than anything else. It’s simple, but it still manages to draw you into the game and immerse you into the descent. 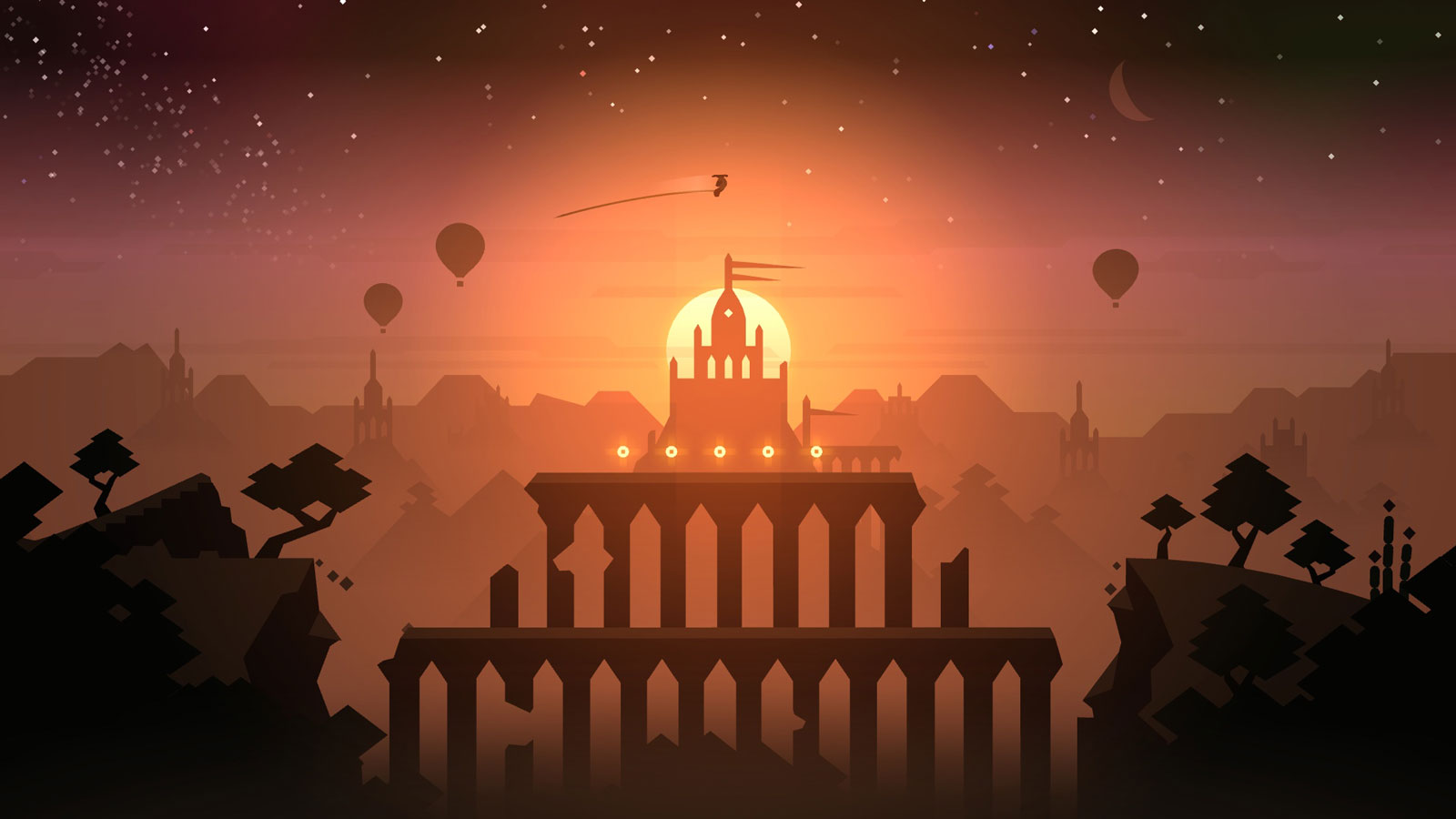 Like Alto’s Adventures, the colors in the background shift giving you the idea that time is actually passing. From breathtaking sunsets to calming starry nights and relaxing rainstorms, the game has everything. The graphics are one part of the package but then there’s also the soundtrack. If you’re a serious gamer, you know all the best games have some of the best soundtracks. Dragon Age Inquisition, the Mass Effect trilogy, Skyrim, I could name plenty. Alto’s Odyssey can probably break into that list.

The track in the standard mode is fairly upbeat keeping with the more hectic pace. It’s the soundtrack used in the Zen mode that steals the show. It’s one of those soundtracks that you might want to listen to even outside of the game because it’s a masterpiece. If you’re playing Zen mode do not do it without earphones. You’ll be missing out on something great.

Like I said, Alto’s Odyssey is more of the same, but much better, more polished and it is basically Alto’s Adventures 2.0. That’s definitely not a bad thing because the previous game was so good itself. If you were to pickup Alto’s Adventures today you’d still call it a great game. Alto’s odyssey builds upon that great game and just makes it greater.