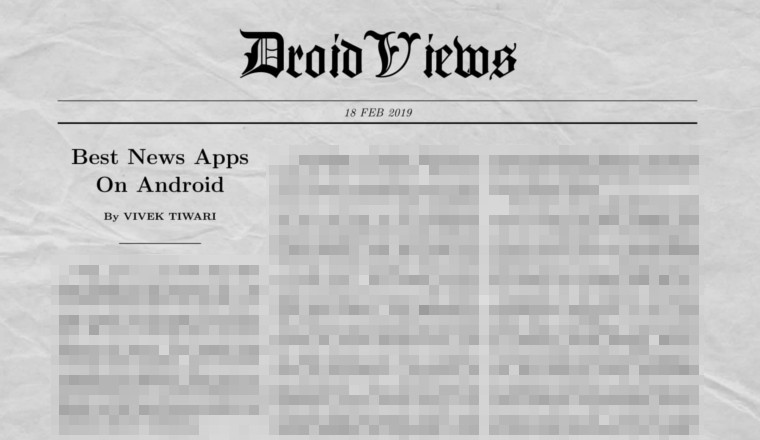 Today we round up the 5 best news apps for Android. You’ll notice we haven’t listed any news apps from popular news sources such as BBC, CNN, etc. And we have a very simple reason for this, mentioned below.

Fake news is on the rise these days, thanks to the Internet. Or.. has it always been there but is only getting caught now because of the Internet? We can’t tell but there is something we do know. You cannot trust even the most popular, most trusted, reputed news agencies. Most news organizations have a political alignment thanks to the line between news and opinion almost vanishing.

This means relying on a single news source, or even multiple news sources that all present the same side of a story doesn’t provide you with the truth. And that’s why instead of news websites and newspapers, news reading has shifted towards news aggregator services. This way, you have news articles from multiple sources right at one place. Thus, making it easier for you to read as many sides to a story as you want before making up your mind, instead of letting a single opinion-maker influence your decision.

Android has a healthy selection of news apps too, but here are the best news apps for Android.

Google has been accused of pushing the leftist propaganda and trying to keep right-wing content away from users. The Google News app solves that problem by aggregating news stories from various sources that you like and presenting you the kind of news that you like, personally optimized for you.

Moreover, a recent addition to this is the perspectives & context feature which is available for most popular news stories. This lets you see the same story reported by different news sources. That is, after all, the most important advantage of a news aggregator service such as this. It also allows you to read magazines and even sync your paid subscriptions. The app also has a dark mode for those of you who like to read in the dark.

If you use Google Maps for navigation, here are 20 Google Maps tips and tricks to help you make the best use of the app.

This is Microsoft’s take on a news aggregator app and unsurprisingly it is quite similar’s to Google’s approach. An algorithm learns from your habits to present to you news that you’d probably like and filter out all the things you don’t. That’s not always the best solution because sometimes the truth isn’t what you like so you may be kept from it. It’s a good thing this app also lets you view the full coverage on a topic from a range of different news sources, like the Google News app.

There’s also a Local News tab where you can get localized news for your specific location. It supports many local languages as well including Hindi. The app is also available on your Windows PC so you can save interesting articles to read later on a bigger screen or mark them on your PC to read later on your phone when you’re in bed, in the dark, helped by the built-in Dark mode. In my opinion, it’s one of the best news apps available for Android.

Do you know all those apps you ever purchased from the Play Store? If you want to see the list of your purchased apps, don’t forget to check our article!

Letting an algorithm decide what news you see might work for some but some people would prefer even further control over what they see. Feedly is for those of you who prefer to depend on their own RSS list for news. It has all the features you’ll need to read and maintain a list of different news sources you follow.

You can also group these in different groups such as all the Android news sources in one group, news about sports in another group, etc. You can search for new feeds to add as well and it even has a Discovery feature for just that. While most of it is free, more advanced features in Feedly are locked behind a subscription. It has a dark mode too just like these 5 web browsers with night theme.

Feedly is undoubtedly one of the most popular and best news reading apps for Android.

Flipboard was here before Google or Microsoft News and it is still a more refreshing take on news aggregation than both of those apps. Flipboard tries to emulate the actual magazine reading experience which is more visual than traditional news reading. Flipping pages triggers a neat animation that makes it seem like an actual page was flipped and news stories are arranged in large grids.

Instead of only relying on algorithms, Flipboard has a human touch with sections such as The Daily Edition and Flipboard Picks. These are human-curated editorial tabs. You can also create your own public magazines for others to follow, and similarly, you can follow magazines created by others. The only downside is that the app does not feature a dark mode yet.

SmartNews sells itself as a is another app that is similar to Google News in its content delivery method. That is, it analyzes a ton of news content to bring you the most influential stories around the world. However, given the string of advanced machine learning frameworks used by the likes of Google and Microsoft, it would be difficult to picture SmartNews doing a better job than those.

It is still a pretty good app in itself though and the most unique aspect to it is the tab switcher. It lets you switch between different sections such as politics, sports, etc. A Discovery tab is also there that lets you see other news sources which you don’t usually follow.

This is all for our suggestions for the best news apps for Android. Try them out and let us know!