From the time when the physical keyboards were abandoned for on-screen keyboards, their design has mostly stayed the same. From Google Keyboard to Fleksy, there is not much of a difference. Every keyboard in the market has at least one feature that sets them apart from the crowd – while the likes of Google Keyboard, Swype, and SwiftKey focus on swiping or gliding through words for faster typing, Fleksy goes for a different approach – tap typing with simple gestures. Now, there is a new player in town, and it claims to be 20 to 70% faster than the existing keyboard apps – WRIO Keyboard. Let’s see what it is all about.

Before proceeding, let’s go through the backstory first. In September 2015, the idea of WRIO Keyboard was put on Kickstarter with the aim of generating funds for creating the app. With 850+ backers, the concept was brought to reality soon after. Since it started as a Kickstarter project, it got better over time, thanks to the feedback it received from its backers. 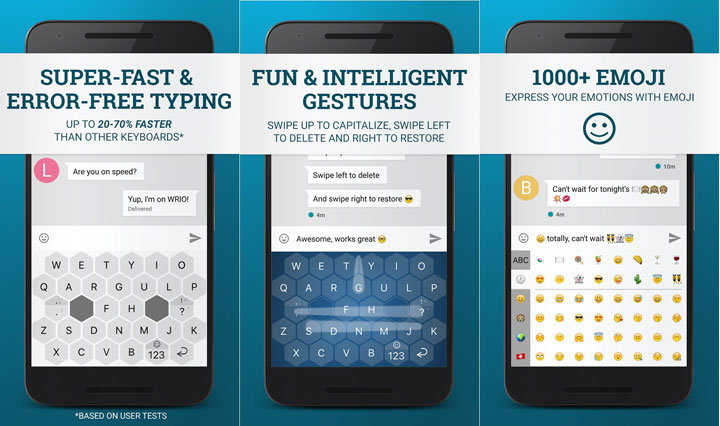 WRIO does away with the traditional QWERTY keyboard we are used to in favor of big hexagonal-shaped keys. After beta testing the app with 800 users and analyzing the results, it was reviled that the typing speed saw an increase of 20 to 70% as compared to traditional keyboards. While the shape of keys has been changed, they are still roughly in the same place. Since it is different than what we have, it will take some time for you to get used to it, but it should not be too hard.

Replacing standard keys with hexagonal patterns have resulted in an increase in the size of keys. Hence, they are easy to reach and it reduces the chance of accidental typos. If you still make some error, the intelligent auto-correction algorithm will take care of it. And, over time, the keyboard adapts itself to your individual typing behavior, further minimizing the occurrence of errors.

The big hexagonal keys are not the only takeaway here. WRIO keyboard also comes with some pretty useful gestures that allow you quick access to certain functions. Swipe up to capitalize, left to delete one or multiple letters, and right to restore the text. A longer tap on a letter lets you insert language-specific diacritics (e.g. é), and you’re also free to decide which diacritics will be displayed. It also supports 30+ languages, and, thanks to the language-specific diacritics, writing in multiple languages becomes a lot easy as you don’t have to switch between multiple keyboard layouts.