I have been a huge fan of platform games since I was a kid. Back then it was Nintendo, now it's Android. Although Android has no shortage of amazing platformer games, Vector by Nekki was a standout when it went live in the play store a few years ago. It was way different than anything I had ever played before. Amazing silhouette representation and graphics, elegant tune, simple yet catchy story and super simple controls made this great combination of platformer and runner a huge success. After the huge success of Vector, Nekki is back with its sequel title called Vector 2. Vector 2 went live a few days back and, being a huge fan of its previous version, I had very high hopes when I downloaded it.

Vector 2, just like the original Vector, has amazing graphics, silhouette representation of the environment and our protagonist. The story is a bit similar to the previous version too. The protagonist runs across the screen while trying not to die. Well, because of a difficult and dangerous environment and lots of lasers and landmines, not dying is quite difficult. You'll die a lot. Like, really a lot. Controls, too, are similar to the previous version. You get various on-screen gestures like right, up and down swipe which are to be performed at the right time so that actions like ducks, dodges, dives, and dips can be executed at the right time.

As you go on you unlock various acrobatic moves and some solid gears which can protect you from deadly lasers and landmines. One thing that I didn't like about Vector 2 is its upgrade mechanism. It's really complicated and I haven't been able to figure it out completely yet. Other than that it's really amazing and clearly lives up to the reputation of Vector.

I've only played some 6-7 levels yet but I can conclude that it's a really nice sequel to Vector. But I still like the original one better. Maybe it's just personal preference but I find it a bit complicated and "stuffed" as compared to its previous version. Vector 2 is free to download and has some In-App Purchases for those who are impatient for upgrades. Anyway, if you liked Vector or if you like games with fast paced action runner platformers and lots of lasers and lots of dying then you have to check out Vector 2. Go get it right now in the Google play store and start running! 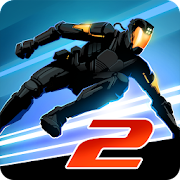