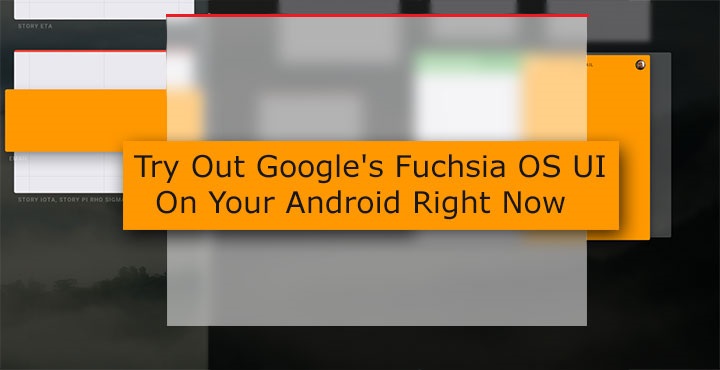 Google is not a company that will ever depend on just one product in the market it seems. Just take a look at all those communication targeted apps that more or less do the same thing in different ways. It turns out, Google is actually working on something to compete with its own Android. Or maybe it is not. We can’t be sure. But the rumored Fuchsia OS from Google now has a UI for smartphones and desktop PCs and we can’t help but think it’s what everyone is guessing it to be. A Chrome OS and Android alternative, and a competitor to Windows 10. You can check out the UI in the video attached below. Better yet, you can even try out Google’s Fuchsia OS UI on your Android right now.

Discovered first by Kyle Bradshaw at Hotfix, the UI is called Armadillo. The mobile OS uses a microkernel instead of the full Linux kernel unlike Android and even Chrome OS. Dumping Linux could come as a bit of a shock to some people but if we look back now, signs were already there. Even the Google Pixel, as ArsTechnica points out, is still using the Linux kernel 3.18 which was released way back in 2014. The latest Linux kernel today is 4.11 and it has 4 other different kernel versions between it and the 3.18 kernel.

Fuchsia is also using Google’s own Flutter SDK for its apps and UI, which is used to create cross-platform code that can run on Android, iOS and as it turns out, Fuchsia too. If you aren’t the Sherlock kind, yes, this also means that it is possible to compile and run Armadillo on an Android device. Fortunately, Kyle Bradshaw has already done all that for us and even put up the APK online for you and me to try out.

Don’t miss: How to Move Chrome Browser Address Bar to the Bottom of Your Screen

So no need to flash anything or learn a bunch of code or anything, simply install an APK, much like a custom launcher. The only difference is you won’t be launching anything with Armadillo. To remind you again, this is only a leaked preview of Google’s secret Fuchsia OS. Nobody knows much about it outside of Mountain View.

From what we can tell though, Fuchsia seems to be a smartphone and tablet-focused OS rather than something you would use with a mouse and keyboard. The interface is built around a card-based system like Google Now. The difference being in that instead of showing only relevant information, it shows you apps. It also reminds us of the recent apps screen on Android, only this one looks a lot cooler. It also shows some information based cards like Google Now. Armadillo allows for these cards to be dragged around and to be used in split-screen mode or a tabbed interface.

Google’s own documentation states that Magenta/Fuchsia is targeting “modern phones and modern personal computers with fast processors, non-trivial amounts of RAM with arbitrary peripherals doing the open-ended computation.” We can’t stress enough though that none of this is official. When and if Fuchsia OS does become official, things may have changed drastically, or not at all.

Must read: Have Your Notifications Read Out Loudly with Speaki

As mentioned, there’s nothing you can do other than exploring the experimental new UI. You can get a taste of what Google is doing behind the scenes. The UI is not as smooth, but that is expected since it is at such an early stage of development. It just came out of a code-based UI after all.

What do you think of this new design direction Google is taking? Do you think the Search giant is going to change how we use our smartphones? Or do you believe that this will end up as another Project Ara and Google Glass?