Ask my parents or relatives or friends and they will tell that I'm a huge sucker for platform games. I've spent countless hours as a kid playing lots of platformers (Super Mario, Adventure Island - to name a few). Anyway, what I'm trying to say is, I have a special place for retro platform games in my heart. And just for that reason, I've searched for Super Mario in the Google play store at least a dozen times. Most of what I found are poor copies of the classic game. But a few weeks ago, I found the game that made me nostalgic and was not a shameless copy of Super Mario. I'm talking about Super Phantom Cat.

The gameplay is everything you'll expect from a classic retro 2D platformer. You play as Chemist White, a cute cat who wants to become the super phantom cat. You have lots of levels divided into various stages. In the name of controls, you get two direction buttons on the bottom left portion of the screen and a jump button on the right portion of the screen. A new button is added from time to time to let you use the power-ups that you collect as you proceed further.

Each level is filled with some enemies - some are slow, some are fast, and some can fly. You can kill them by jumping on them or they'll kill you when they touch you. You also have to smash bricks by jumping to collect points/coins - call them whatever you want. These coins can be used to change characters in further levels. As you advance, you get powerups. For instance, first, you get the bullet power-up that lets you shoot bullets in the direction you are facing. Then you get a powerup to smash bricks by jumping on them. Some other power-ups include teleporter, bombs, etc.

Each level contains 3 hidden stars that you have to collect, but it's not mandatory to complete the level. Speaking of hidden things, there are some secret areas hidden in the walls from where you can collect coins and stuff. To complete a level, reach to the portal at the end.

The graphics are colorful and enjoyable. They completely go with the overall theme of the game. If you think it's similar to Super Mario, get ready to be disappointed. Although the graphics are not unique, they manage to look original and fresh. As for sound, I'll just say that it's fitting for the atmosphere or the overall experience that the developers have created.

So that's Super Phantom Cat. One thing that I liked a lot about it is that it has that replayability. It's so fun and entertaining that you can play a single level again and again and that's not something you see a lot these days. 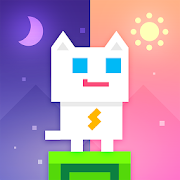