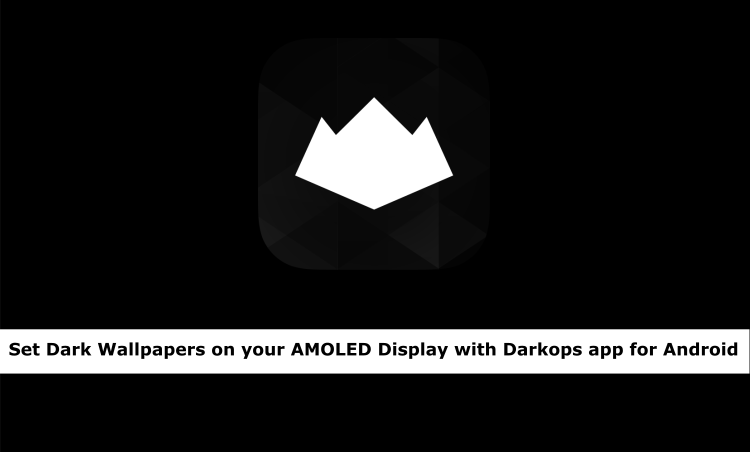 There has been a growing craze among the Android users for applying dark wallpapers for their Android devices. This is partly because of the fact that the latest Android flagship devices come with AMOLED displays which are known to have true blacks which are much better than the blacks seen on LCD displays. Also, the reason behind applying dark wallpapers or black wallpapers to your device could be because of the lower battery consumption that takes place due to fewer colors. It is a widely known fact that if you apply dark wallpapers which have very fewer colors or even better, Pitch Black Wallpapers than the battery life on your device would improve leaps and bounds.

The Darkops app provides a wide range of wallpapers for your Android device and the app is available for both phones as well as tablets.

The app is simple to use and when you first open the app, you will see 4 tabs on top and the default tab which will open on startup is the recent tab which shows the most recent wallpapers that have been added to the app.

The next tab in the Darkops app is the Shuffle tab which can be accessed by swiping to the very first tab inside the app. As the name suggests, the tab will shuffle the wallpapers according to a fixed criteria and the app currently shuffles wallpapers based on “Top 10” rating which can be done by clicking on the top-right corner as highlighted in the screenshot down below.

The third tab inside the app is the Categories tab which shows the wallpapers that are divided into different criteria like the Alphabets, Misc(miscellaneous), Space etc. There is a wide range of wallpapers available in each category and there are many categories available as well.

The last and final tab which is present in the Darkops app is the Favourite tab which shows the wallpapers that have starred by users. Now, in order to add any wallpaper to the starred tab then the user will have to tap on the heart icon. Before favoriting the wallpaper, the heart icon seen on the screen will be shown as an outline as seen in the below screenshot.

After selecting the wallpaper, the wallpaper selection screen will have a heart filled with white color which indicates that this is a favorited wallpaper. This can be seen in the screenshot down below.

Once the user favorites a wallpaper, the wallpaper will be seen in a separate tab so that the user does not have to search for the exact same wallpaper when the user wants it for future use.

If the user selects the option to remove ads then there is a one-time payment option of INR 65 which removes the ads for lifetime inside the app.

When the user selects the option to set the wallpaper with the system app then the app shows the various options through which the wallpaper can be set as seen in the below screenshot.