One tap games are the big thing currently on the mobile gaming platform. Although these kind if games sound too easy to play but they are not. Why? Because they are "easy yet hard" and "addictive yet frustrating". My first one tap game was Flappy Bird and I don't need to explain how addictive it is. I've spent countless hours playing it and yet can't reach a high score I could be proud of (BTW, my Flappy Bird high score is 83). But eventually I left it for the next best one tap game, One More Line. One More Line, by SMG Studio, was my favorite time waster for months. I was addicted. It’s the combination of bright colors, minimalism and crazy lines. There's a new game by SMG Studio which follows the same concept as One More Line minus the crazy lines called One More Dash and it's awesome. I downloaded it last night and have been playing it since then. Similar to One More Line, One More Dash adopts the one tap mechanic. Your objective is to tap the screen at just the right moment to make your little ball jump from one pod to the next. There’s limited time to get into the next pod i.e. before the ball explodes, but you can bounce off walls to reset the timer. It's not as easy as it sounds because there will be rotating barriers blocking your way. If you don’t time your jump perfectly, you’ll either be thrown into the unknown or get yourself killed on colorful spikes. One thing which motivated me to play One More Line again and again was its soundtrack. It’s the combination of electronic and robotic tunes, which suited the gameplay perfectly. Although the soundtrack of One More Dash is fairly good, it failed to captivate me. It isn't as catchy as the soundtrack of its predecessor. The thing which makes it different from One More Line is that instead of just having an endless play; One More Dash has got challenges. Completing challenges awards orbs that can be spent to unlock themes and characters. SMG Studio has nailed it again. They know how to make games that makes you forget time. It is free to download and you can pay to remove ads. If you are looking for a great time waster then you should totally try one more dash, it won't disappoint you. 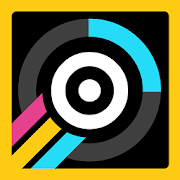