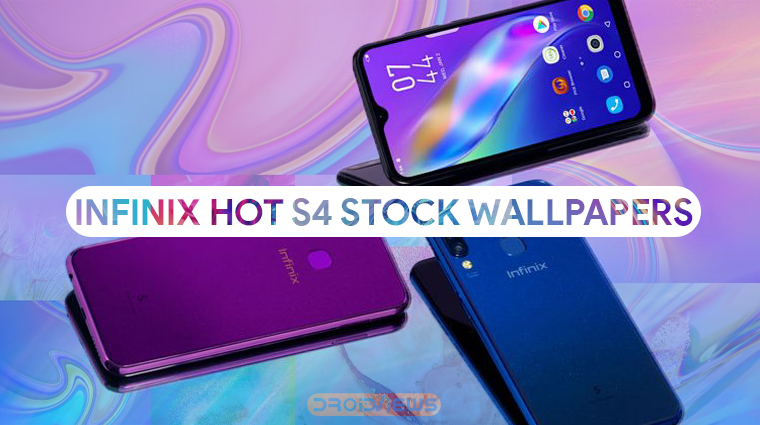 Infinix is not as well-known of a name in the smartphone world as something like Xiaomi, but they do make smartphones, and pretty decent ones at that. Infinix is a Hong-Kong based smartphone manufacturer. The company is trying to capitalize on the camera functionality in its budget smartphone lineup. For the price, the smartphone packs in some great hardware. It also ships with some beautiful new wallpapers. You can find the link to download Infinix Hot S4 stock wallpapers below.

The Infinix Hot S4 is a budget device that costs less than ₹10,000. Therefore we don’t expect it to bring anything new to the table really, not it does. But it does pack in a triple camera module on the rear which is rare in this price segment.

The phone doesn’t stand much apart from the crowd of other phones in terms of design. The same can be said for phones that cost 5 to 7 times more, however. The manufacturer has housed the internals in a plastic body like most phones in this range. The plastic build is made to look and feel like glass, but it’s much easier to scratch it. On the back, the horizontally placed Infinix branding sits slightly above the center just below the squircle shaped fingerprint scanner.

There are three rear cameras all combined into a single, protruding camera module. These are aligned vertically along the left side with the LED flash just below the camera module. Other than that, the back is just plain and empty. On the front, there’s the usual notched display with a water-drop notch and a bottom chin.

The device features a 6.2-inch display with a resolution of 720 pixels by 1520 pixels at an aspect ratio of 19:9. The Infinix Hot S4 wallpapers are of the same resolution. There are around 271 pixels per inch of the display and it all amounts up to a screen-to-body ratio of 82% which is good enough considering the price point. It’s an IPS LCD capacitive touchscreen capable of producing 16 million colors.

The MediaTek MT6762 Helio P22 is packed inside the device with PowerVR GE8320 GPU. This is actually a much more powerful CPU than the usual Qualcomm Snapdragon 400 series CPUs generally found in this price range. There is at least 3GB of RAM to help the processor out with 32GB of internal storage. There is another variant with 64GB of storage and the 4GB of RAM. The storage is expandable via a microSD card up to 256GB.

The device packs in a rather large 4000mAh Li-Po cell. It is non-removable, obviously, and does not support any form of fast charging either. It runs the company’s own skin called Infinix XOS 5.0 Honeybee based on Android 9.0 out of the box.

Onto the most impressive parts of the phone, at least on paper, the camera. It’s a triple camera system on the back which is again a break from the limitations of sub-₹10,000 price range. The primary camera is a 13 MP sensor with PDAF support. It is aided by an additional 8 MP ultra wide sensor and a 2 depth MP sensor. It is difficult to find an ultra wide camera on most smartphones still, even those much more expensive than this. So just the fact that it does pack one in is impressive.

These are capable of recording videos in 1080p at 30 fps. The selfie camera on the front is a 32 MP shooter. There are no advanced features such as PDAF or HDR support but these cameras work. And at this price point, there’s probably little we can complain about given that no smartphone cameras at this price are any better than the rest.

We have 13 Infinix Hot S4 wallpapers that you can check out below. The device itself sports only an HD+ display, therefore the Infinix Hot S4 stock wallpapers also have the same resolution, i.e. 720 pixels by 1520 pixels.

We’ve uploaded some of them but the images below are compressed JPEGs, only meant for demonstration. We have packed the actual high-quality PNG wallpapers into a single, easy-to-download zip file. You can download the Infinix Hot S4 wallpapers from the link provided below.

We have a big collection of stock wallpapers. Having downloaded the Infinix Hot S4 wallpapers, do not forget to browse our Infinix wallpapers collection.