The Jelly Bean update for the Android devices brought a completely revamped and fledged notification system with expandable and actionable notifications. Nowadays, most high-end smartphones come with LED indicators that get you notified with blinks in a variety of colors whenever you have a new missed call, message, and email. However, most Android devices are not blessed with either Jelly Bean or LED light indicators. Flash Blink app brings flash notification alerts to any Android device.

The app we’re going to review today is not new in any way and it is available at the Play Store for more than a year. The reason why we have taken note of it now actually is a recent update that has made it even more useful with added features. The name of this useful app is Flash Blink and it has been developed by Faiyyaz Shaikh.

Flash Blink is a holo themed app with a very simple and easy-to-use user interface. This app is a very handy tool for those who think that the notification system of their device is not enough and who want a new way of getting notified for a call, message, mail, alarm or even a third-party app. If you miss notifications received by your phone, Flash Blink is capable of drawing your attention by flashing the camera flashlight at predefined intervals.

If you have ever used an iPhone, you must be acquainted with the flashlight blinking for notifications but this little app for Android app has a lot more to offer. Flash Blink is a feature-packed app that lets you customize every single thing you might want from such an app. It allows you to define the flash count, duration and flash blink pause. You can create a profile and set the time during which you want flash blink notifier.

Just as you launch the app, you are greeted by a flashlight screen tapping which turns on the camera flash to work as a torch. To get into the settings interface and view the real menu of the app, you’ll have to tap the Settings icon on the top bar.

As you mentioned earlier, Flash Blink has seen a major update recently, here are the new features:

I have been using this app for a week now and found it a pretty handy tool that deserves a corner in any Android device’s app drawer. Try this app and it will not disappoint you. 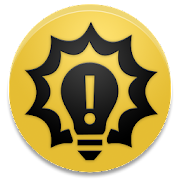 Do not Miss these too