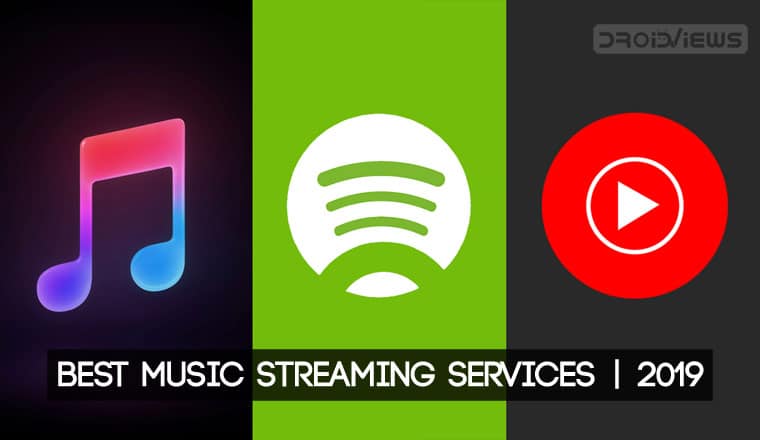 With all the new music streaming services releasing lately, it can be a tough choice for users looking for a well-rounded service that checks in all the right boxes. Maybe you don’t like your current music provider or just want to explore the other options. Whatever the case maybe we’re here to sort things out for you. This is the final breakdown of the best music streaming services available in 2019.

Let’s take a look at the best streaming services one by one and start with Spotify.

We cannot talk about music streaming services without talking about Spotify. The perfect app to curate music and get good recommendations. Spotify’s Daily Mix and Discover Weekly are exactly on point. Those Playlists have blasted my ears with some genuine EDMs. Crossfade and Gapless are some less appreciated features of Spotify. These features make switching music that much smoother. Playing a high song after a low song feels comfortable.

Recently, Spotify expanded its reach by launching in India. However, not completely. There are a few songs that are missing for the Indian users due to regional restrictions. Some important artists such as Linkin Park, Alec Benjamin, and Maggie Lindemann are greyed out (unavailable) on the Spotify app at the moment. This is something that will get fixed over time. Till then it’s hard to recommend Spotify to my fellow Indians. Spotify is undoubtedly one of the best music streaming services you can enjoy.

Another big name in the music streaming service. Apple Music is the closest rival of Spotify. The weekly recommendations of Apple Music such as Friday Feeling are ample. However, it still leaves a lot to be desired here. The UI is clean and minimalistic. The 24×7 Beats1 Radio is something that cannot be ignored. It is curated by famous DJs every day.

Apple Music has the widest variety of songs (40+ Million) and counting. Plus, the first free three months make it hard to ignore. It also has a built-in lyrics feature which I found myself missing when I switched over to Spotify. Apple Music, which was earlier available to Apple users only, can be enjoyed by Android users too and offers one of the best music streaming services.

Late to the game but definitely not disqualified. YouTube Music has potential. There are a few features that enable it to stand on its own. For instance, searching a song by describing it. YouTube Music is merging with Google Play Music. This means the library of songs is gonna be wide enough for the majority of the users.

YouTube Music Premium also has this feature of playing videos in the background or the device turned off. This means that the library is as vast as YouTube itself. Since anything that’s on a music streaming service is gonna be on YouTube the library is complete period. However, battery life is the main concern here. I used YouTube Music for a week and the battery consumption while playing videos in the background was definitely more than other streaming services such as Spotify. All and all it is a great app and is definitely worth checking out. Plus, the first three months are free.

Full Review: YouTube Music Goes Live in India: Is It Worth It?

All of the above-mentioned music streaming services are great. None of them will disappoint unless you’re an audiophile. However, if I had to pick one, it would be Apple Music for its clean UI, 24×7 beats1 radio, first three months free and lyrics feature. Not to mention that there are no regional restrictions with this app unless you’re into Japanese music or something. Which music streaming service is the best for you? Let’s know in comments!