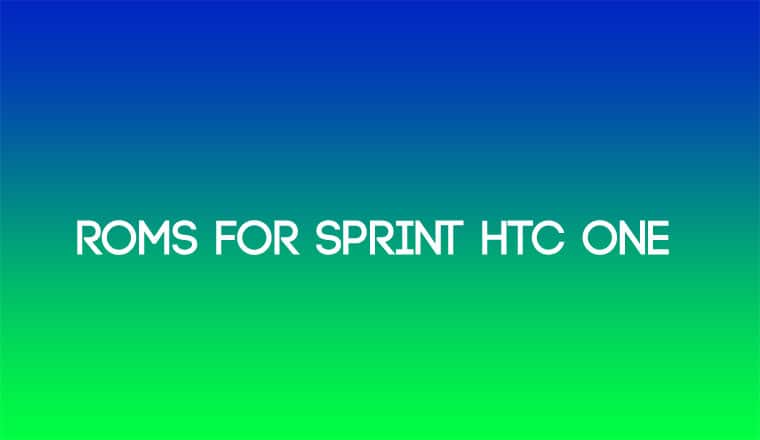 Listed as one of the best smartphones available yet, the HTC One is Quad-core 1.7GHz Krait300 running Qualcomm Snapdragon 600 chipset with 2GB RAM offering both 32/64 GB internal storage. The device has every potential to be compared to other top devices, such as the Samsung Galaxy S4 and the Nexus 4.

While the limitations come in, only and only when the carriers are bound to a device and so rises in the case of HTC One, which is branded to Sprint. This barrier is stricken with the installation of a Custom ROM and here we’re today listing the best Custom ROMs for the Sprint HTC One which is based on Jelly Bean, both 4.1.2 and 4.2.2.

Please note that the ROMs mentioned here are completely based on user-experience and feedback. And so they are mentioned regardless of their order.

How to Install a Custom ROM:

The Rootbox project was initiated by XDA’s Recognized Developer and Contributor bajee11 as the lead developer with a few other contributors. It began with the era of Jelly Bean, currently supporting 15 devices officially with countless number of unofficial ports. Vanilla Rootbox is built over AOSP base, bringing in the best and useful- only features from AOKP, CyanogenMod & ParanoidAndroid including ROM Control & Hybrid System, accompanied by more amazing features.

Since HTC One is not yet supported officially by the team, an esteemed developer houstonn at XDA forums took this work into his own hands, put together the sources with immense hard work and presented it to the public. The ROM is quite stable for the daily use. If you’re someone seeking a huge list of features of different ROMs and prefer AOSP over Sense, then you must put your hands on Vanilla Rootbox.

ViperROM is a well-known aftermarket custom firmware for a list of HTC devices, based completely on HTC’s Sense. The team is led by -viperboy- with several other developers, aiming highly at performance, power and support. It enhances the user-experience to heights with revolutionary features to achieve perfection. The ROM comprises of unique features like viperControl & several UI modifications with all the useless Apps discarded from their roots.

ViperROM is not just one of the best but also the first ever Custom ROM for the Sprint HTC One. It extends the functions of the stock ROM to immeasurable heights bringing in the combo of stock battery life and custom performance, which sums it up to be the best Custom ROM based on stock HTC firmware. If you’re a Sense lover and yet miss custom features, be right here and experience it live with viperROM using the ViperControl script. The current release till date is based on de-odexed v1.29.651.10 system dump labelled version 1.1.0. The ROM is extremely stable, while providing the best features.

Follow the XDA Thread link below to browse mods and add-on for viperROM.

ParanoidAndroid or PA relates back its origin with the release of Android 4.0 IceCreamSandwich. This ROM and its developers have always been keen to introduce something unique every now and then. Today, it is based on Android 4.2 Jelly Bean, offering the most remarkable features of Android’s era. The ROM  developers hold a high place for initiating and maintaining concepts like Pie and Halo.  Major features include Per-App DPI, Per-App Colors, Pie Control & Halo.

ParanoidAndroid is already on HTC One worldwide variant and is yet to reach its CDMA Sprint variant. Till then, an unofficial but a very stable port of the latest ROM has been bought to the users by ktempleton. The ROM is compiled from the latest sources bringing in all the features available. It is also highly stable with least bugs and is to be regarded as daily driver for those who search for extremely extended UI along with stability. The latest build was out on 7 July 2013 as PA v3.65.

Chameleon OS or ChaOS is a complete overhaul of User Interface which claims to give its users a much better control than any other custom ROMs available. Keeping CyanogenMod as base, it offers a completely new theme engine, launcher, custom toggles and a lot more to list here. It is another ROM like ParanoidAndroid, which believes in beautiful and unique user-interface/framework and serves well with more-than-unique features. And since it is based on CM, it incorporates each and every feature of it too. At present 11 different devices are supported officially by the team and more are being added every now and then.

It is bought as an unofficial port by TMartin which is highly recommended for those who prefer looks and interface over anything else. A few minor bugs include In-call bluetooth audio, IR sensor, Wifi direct and HDMI, apart from this everything else is smooth as butter. The latest build was released on 13 May 2013.

How to Take Screenshots on HTC One

Enjoy Custom Fonts on Your HTC One (Sense 5)

Root HTC One (M7) and Install ClockworkMod/TWRP Recovery on It

The list shall be updated very soon with more ROMs, stay tuned! Flash one of these and leave your feedback.