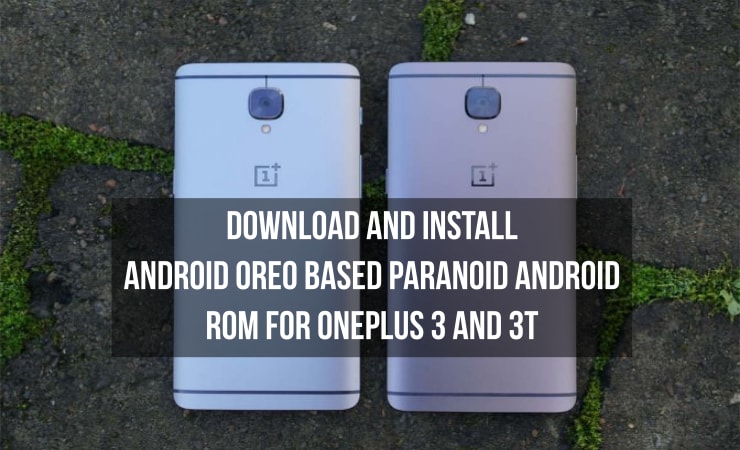 Other than the internals, the OnePlus 3 and OnePlus 3T were exactly similar in terms of its design. The OnePlus 3T came out with a darker color called as the Gunmetal Grey whereas the OnePlus 3 was launched with the Silver color variant. Now, both the smartphones were launched by OnePlus with Android 6.0.1 Marshmallow along with OxygenOS on top of it. However, it was surprising to see that OnePlus 3T did not come out with the latest Android 7.0 Nougat update as the latest version of Android was released quite before the release of the smartphone.

Thus, it was also the time that Custom ROMs would also be made available for the OnePlus 3 and 3T which is based on Android Oreo and we are going to tell you just that. Now, one of the first Android Oreo-based Custom ROM is available for the OnePlus 3 and 3T. To add to the excitement of getting the first Custom ROM with the latest version of Android for the devices, it is also worth noting that this Custom ROM is from Paranoid Android which is based on AOSPA.

The news of the release of Android Oreo-based Paranoid Android ROM was shared by Grarak, a recognized developer on OnePlus Forums. Also, we would like to tell you that this ROM is still in Alpha stage and there are major bugs which should be expected to be polished in the coming builds. We have compiled a list of known bugs which can be found from below.

Now, you will have the Alpha ROM of Paranoid Android on your OnePlus 3 and 3T once you follow all the steps that have been mentioned in the guide which we have mentioned above. However, we have already mentioned that there are some major bugs which are expected from this ROM and it is not recommended to be installed on your device which is used as a Daily Driver.

Also, if you have any problems in installing this ROM from the steps mentioned above then you can comment on your questions in the comments section below.