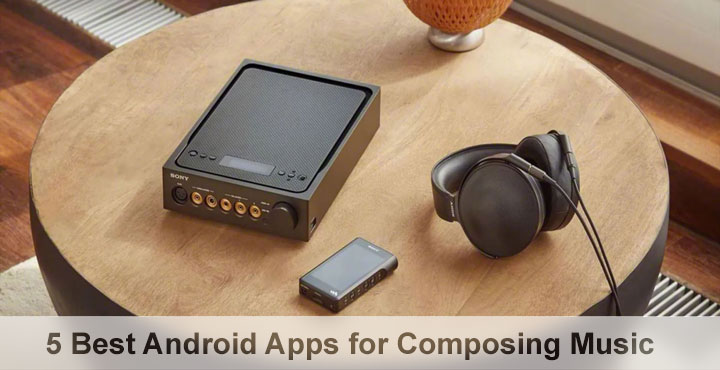 If you love music and Android both, it’s time for fun! You can now compose music on your phone using apps. Today we have shortlisted 5 of the best music composer apps for Android.

The mobile boom and hence the internet’s rapid growth opened a world of opportunities for creative individuals. Whether the post-PC era is a real thing or just a marketing lingo, mobile devices have indeed taken over a few of the PC’s functions such as browsing the web, content consumption, online shopping, email communication, schedule organizing and to some extent even gaming. The only reason they haven’t overtaken the PC in other areas such as content creation is because of their smaller screens, lower processing power, and awkward input method. Things might change, however, and probably already are.

Apple’s iPhones and iPads have long been the choice for mobile music making. Android finally caught up with improved audio latency in Android 5.0, which has led to an increase in the number of apps for the music creators. Without much ado, let’s check out the 5 best Android apps for composing music.

You shouldn’t be surprised to see this name here. Guitar Tuner is one of the most popular music composing apps with over 20 million downloads on the Google Play store. First of all, it’s free. Second, it supports not only a lot of different kind of guitars but also bass, ukulele, and all popular string instruments.

The app also includes some fun interactive games to help you learn and the interface is easy to use as well. Previously known as Guitar Tuna, the app touts its “award-winning audio technology” and “professional accuracy for advanced players”.

Remember the time when music composers had to spend fortunes for full studio equipment? Well, the pros still kind of do but a young budding music composer can also start his career with his smartphone or tablet these days.

Walk Band, which looks a lot like iOS’s Garage Band is one of those apps that can claim to be a full studio in itself. It includes drums, bass, guitars, and accepts audio input. It also lets you record yourself in both MIDI and audio so it’s a good app for a quick jam.

Music maker JAM is another very popular app for music composers with over 10 million installs. Unlike the other apps listed above, Music Make JAM not only lets you create music but also share your creation with its community of millions and discover some of their creations for your inspiration.

You can also take part in global challenges where you can earn followers and a name for yourself. While the app is free to use, it also contains in-app purchases. You can “choose from 200+ music style packs including trap, hip-hop, dubstep, rock, pop, funk, drum and bass, techno, house, ambient, jazz and movie scores.”

Music composing is not all about simulating instruments. Sometimes it can also mean recording the best possible sound while you play an actual instrument. The tiny microphones our smartphones or tablets can’t even come close to the studio recording quality.

Using an external microphone and RecForge Pro is the closest you can get to a studio like recording on an Android device. It can record in MP3, OGG, or WAV and even supports the conversion of audio files between the three formats. One can even store the recorded sound clips in the cloud or edit a recorded file before doing anything with it.  There are a bunch of settings you can explore to get that perfect sound.

There’s no way you don’t imagine a DJ when someone says “composing music.” Or maybe you don’t. The point is, a lot of us have at some point or the other in our lives imagined being a DJ or pretended to be one. While not as great as iOS’ Traktor DJ, DJ Studio 5 still is the best alternative there is for some good DJing on Android.

The app is completely free to use but if you want you can pay the developers by buying some skins. The app is pretty simple to get around and at the same time also has some complex features for those pro DJs out there. Trust us, this one can be quite entertaining.

So have you tried any of these apps? Would you recommend any other apps? Feel free to comment below.