Pluvius is an Android app for rooted devices which makes the system UI color themes to change based on the current wallpaper. It supports Android 8.x Oreo and above. Enjoy wallpaper based System UI themes on Android devices with Pluvius.

Sony may not be doing so well in the smartphone market but the company has been contributing actively to the Android Open Source Project. One of its recent contributions, the Overlay Manager Service, or OMS has actually been included in stock Android by Google starting Android 8.0 Oreo. These overlays can be built to target the resources any Android app. This includes the System UI and the Android framework. The overlay can then override the default values.

Then Google went ahead and blocked access to the overlays in Android 9.0 Pie. Apparently, the OMS is only for OEMs to use. Not if you have a rooted Android Pie device though. And with Pluvius, you can have a fresh looking system UI everytime you change wallpapers. It uses the OMS just like Substratum but unlike Substratum, it still requires root even on Android Oreo. The app is available for free on the Google Play Store but only as a 14-day trial. If you like the app you can pay the developer anywhere between $2 to $5 depending on how happy you are to get the app for a lifetime.

Let’s see how you can get wallpaper based System UI themes on your Android device with root privilege. 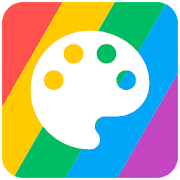 As I said, Pluvius requires root access. If you’re rooted in 2019, you most probably are rooted with Magisk, instead of SuperSU or any other rooting solutions. With Magisk, comes the Magisk systemless framework and several mods that you can install. Pluvius does not necessarily need the Magisk framework and can work without it. However, since you already do have Magisk, we’d suggest you use the Pluvius OMS Runtime magisk module since it can then bypass the SafetyNet without breaking it. After all, that’s the whole point of rooting with Magisk.

With the magisk module installed and ready, launch the Pluvius app and go through the installer. It will guide you through the sign in and granting permissions and the usual stuff. When you’re asked to Select runtime mode, choose Magisk Module (Root). If everything worked alright you should be able to see the app’s main page which lists wallpaper based System UI themes for the System Accent as well as the SystemUI.

Turn the toggle on for whichever theme and you’ll be allowed to choose the kind of color Pluvius should pick up from a wallpaper. Obviously, wallpaper is often colorful with more than one color. So you can make Pluvius pick the dominant color from the wallpaper, the darker color, the most vibrant one or simply set a custom color of your choice. You can toggle on both the themes at once if you prefer or just one of them. When you do, anytime you change your wallpaper you should see a difference.

Keep in mind that this isn’t an officially supported app. It uses root access to access the OMS which it isn’t supposed to access. Despite the very polished app and being a paid one, it is but a hack. So when you change your wallpaper, the changes to the wallpaper based System UI themes aren’t as immediate or smoothly done. Anytime the wallpaper is changed, the System UI will be restarted once to apply the new overlays. This isn’t as bad as it sounds but it is something you’ll want to be aware of. It’s not a bug but it’s just bound to happen as it does with Substratum themes or any other theme apps you may use.

Also, your mileage may vary depending on the version of Android you’re using. Clearly, Pluvius is made for stock Android so it will work on the Pixel, Nokia devices, Essential Phone, etc. and not on Xperia, Samsung, OnePlus, devices. It also works on any device with an AOSP based custom ROM but not with ROMs that are heavily modified, especially those with built-in accent themes and other overlays.