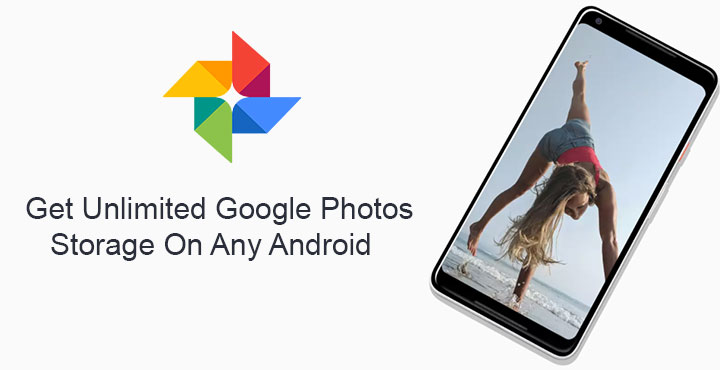 When Google launched the Pixel smartphones last year, they made quite clear that they wanted to use the software as the selling point, not the hardware. The original Pixel phones weren’t the sleekest, sexiest gadgets but they packed in a software experience that many have called “the best.” One of the most useful of those features was unlimited Google Photos storage for photos and videos. Oh sure you have that on your non-Google device as well but it isn’t quite the same. On other devices, Google Photos offers unlimited storage but the files are compressed.

With a Pixel though, users get unlimited storage without compromising the quality of the photos or videos. Some might call it true unlimited cloud storage. This feature, while limited to only Google made phones and the Moto X4 Android One edition, can now be enjoyed on any rooted Android device. Thanks to a small workaround discovered by XDA Member emime12 which, by the way, also allows you to get exclusive wallpaper categories on the Google Wallpapers application.

Next time you launch the Google Photos app, you’ll be greeted with a message. It essentially says the app thinks you have a Pixel so yay unlimited photo and video storage!

Simply placing, or replacing, the xml file in the sysconfig folder should do the trick for most devices. But in case it didn’t work for you, you can try the following build.prop edits. This can also be done easily with the file explorer app which usually comes with a built-in text editor. The build.prop file is located in the /system folder. Open the file, find the following lines and change the values to match the lines below.

You can also make use of a build.prop editor app which is slightly easier to use than a standard text editor and file browser.

We already mentioned that this little trick not only gives you an unlimited photo and video storage on Google Photos but also enables some exclusive wallpaper categories on the Google Wallpapers app. If you’ve previously used and then discarded the said app, now would be a good time to give it another try. It is possible that you may just see more love from some other Google apps as well. This is because apps like Google Photos and Wallpapers look for a specific flag in the nexus.xml file instead of flags in the build.prop file (like the build.prop edits to enable Google Assistant).

It is quite possible that Google will soon patch this … “bug” as soon as they learn about its discovery. Until then, you can show your unlimited Google Photos storage to your friends.

Don’t Miss: How to Archive Your Pictures in Google Photos