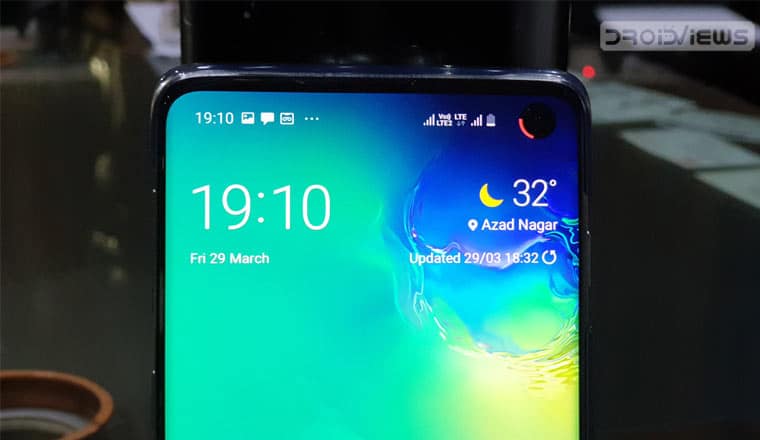 Energy Ring sits on the screen silently putting almost 0% load on CPU, if battery level changes, Android wakes up Energy Ring. Once awake, Energy Ring quickly updates itself and goes back to sleep. And to be that extra efficient, the Ring goes on deep sleep when you turn off the screen, meaning it doesn’t even read changes in battery level when the screen is off.

If it was hard to guess from the name, Energy Ring overlays a battery status ring around the front camera cutout. The app supports not just the Galaxy S10 but also the Galaxy S10+ and the Galaxy S10e. If you prefer to rather highlight the camera cutout, this will provide a unique and colorful appearance to it. Of course, it is bound to attract some eyeballs but that’s probably what you want.

Do keep in mind though that the app is currently in beta testing. Although it received an update recently you can still encounter a few bugs like the left edge of the circle getting cut-off slightly by the cutout on the S10e.

When you have the app installed, launch and go through the initial screens to land on the app’s main page. Turn on the toggle in the top right corner and you’ll be redirected to the Notification access settings page.

Turn on the toggle and then you’ll be redirected immediately to another permission page. This time you’ll need to grant the app the permission to draw over other apps or Appear on top as Samsung calls it. With both permissions granted, you’ll notice the energy ring around the camera hole already.

Must Read: Calibrate Battery on Android for Longer Battery Life

Energy ring has been developed by the same developer who created the popular Energy Bar app. If you’ve used it before, you’ll feel familiar with all the customizations and configurations in Energy Ring. It’s essentially the same app designed especially for the Galaxy S10, Galaxy S10+, and Galaxy S10e. The first option you’ll notice is the RING THICKNESS slider.

It’s not hard to guess what this slider does. Below it, you can choose the direction of the battery meter circle. The app can be configured to auto-hide in full-screen apps which is great because that would’ve been annoying. If you scroll down you can also find the option to change the charging animation. There are up to eight different animations to choose from as of now.

There are a few different color configurations as well: Segments, Merged Segments, Gradient Segments, and Gradient. In all of these, you can define four different colors for various battery percentages ranging from 1% to 25%, 26% to 50%, 51% to 75%, and 76% to 100%.

As mentioned before, the app is still in beta so there are obvious improvements to be made. For one, the Energy ring only appears around the camera hole when the device is awake and unlocked. It would be great to have it be visible on the Always on Display and/or the lock screen.