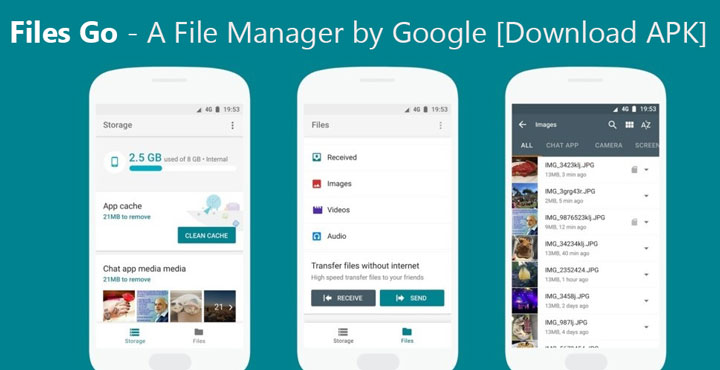 Android has had built-in file managers for a very, very long time thanks to the various OEMs. It wasn’t until recently though that stock Android got a file manager of its own. It wasn’t really as good as the others and was pretty limited. But it was a start to something it seems and we’re even more confident about that now. Google just released its very own take on a light-weight file manager for Android, called Files Go. Some might be able to figure out from the name that Files Go seems to be a part of Android Go. If you don’t remember, the Android Go experience, as Google calls it, is made for ultra-budget devices. As such, it has been designed keeping in mind smaller screens and less-than-radical amounts of processor power.

Google’s take on a File manager is just a tad bit different. Many devices like those from Samsung, Huawei, etc. have a cleaner built into the system itself. Many third-party file managers have built-in cleaners as well. Files Go has one too and Google makes sure it does not get ignored by putting it front and center in the app. Compared to many other file managers this is one pretty light-weight and it looks nice too. The app was live on the Google Play Store for a while before it was pulled. Apparently, it was a closed beta program and it didn’t take long before the house was full. But don’t worry, there is an APK you can download. 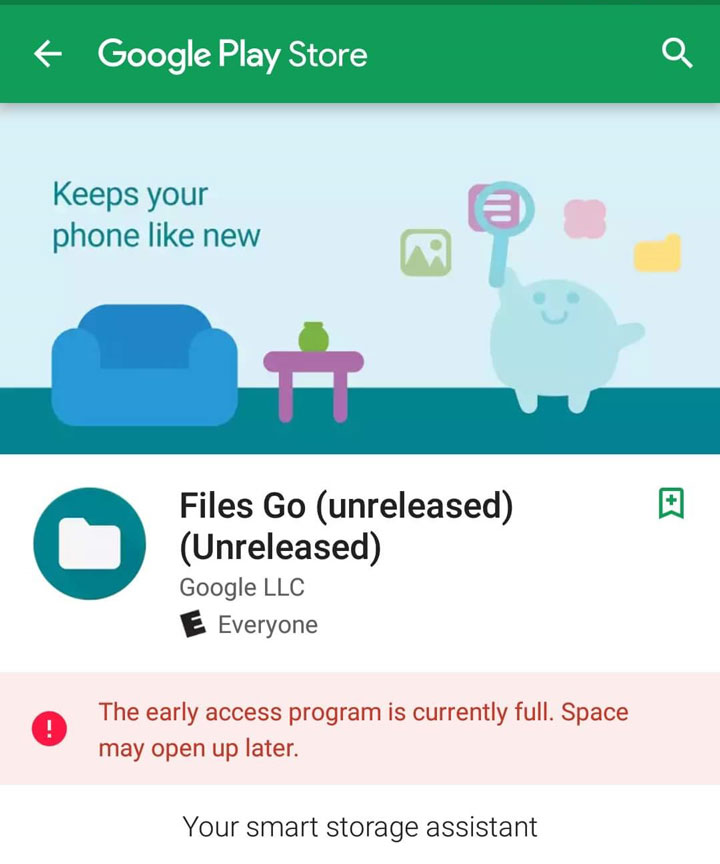 Files Go will be able to offer suggestions for apps that you no longer use and can delete. It can also help find and remove any duplicated images or files that you have stored on your drive. I’ve already cleaned quite a lot of duplicates I never knew I had in the first place. It works alright. Moreover, Files Go does not present you a countless number of folders. You should see it for yourself I suppose.

When you launch the app and allow the storage permission, right up front is the storage tab. This is where you’ll see all the storage tips and suggestions on which files and apps you can delete. This is an essential feature for devices with less than 1GB RAM and those that are low on storage spaces. You can see the amount of used and free storage right at the top.

As mentioned, Files Go can notify you about uninstalling apps that you haven’t used in a while but it will need usage access to do so. If you do want to grant it that, tap the three dot menu button in the top-right corner and select Settings. Toggle on Unused apps and then you’ll be taken to the respective Settings page where you can allow usage access.

Now, I already mentioned that Files Go does not show a ton of folders from your device, unlike other file managers. Instead, it shows all your files in one spot, and you can filter them by source. For instance, if you’re looking for a video file, go to the Files tab and tap Video. You’ll then be able to see all the videos stored on your device under a tab labeled ALL. Swipe to the right and you can switch tabs which are all, in fact, folders containing video files.

And it makes sense because the general population can very easily get confused with the folder view. Considering most of those folders aren’t user created. In fact, many people might not even be aware that they have so many automatically created folders on their device. Categorizing files in such a way is not a revolutionary new idea and many file managers including those from OEMs have had this. The only difference is they still allow users to get to the folder view, Files Go does not, yet.

The best feature by far though is the ability to send and receive files from within the file manager. You may have noticed the SEND and RECEIVE buttons in the screenshot above. It works pretty much like other offline file sharing apps such as ShareIt or Xender. Although Files Go uses both a WiFi Hotspot and Bluetooth to accomplish the task.

Also see: How to Stop Private Pictures and Videos from Showing in the Gallery

To sum up, Files Go is a pretty dope app even in this closed beta stage. It looks good, feels good, works well. Furthermore, it cancels out the need for apps such as ShareIt and Xender which are both pretty resource heavy. Files Go has the potential to be the best File manager for low-end devices really but it’s hard to give it the title as of now. That’s because it just cannot handle zip archives or any archives for that matter. You can only share zip files, rename them, delete them, the usual stuff. You can’t extract or even preview the contents.

Hopefully when the app does make a reappearance on Google Play that will be sorted out. Considering Google though, I am not quite sure about that.