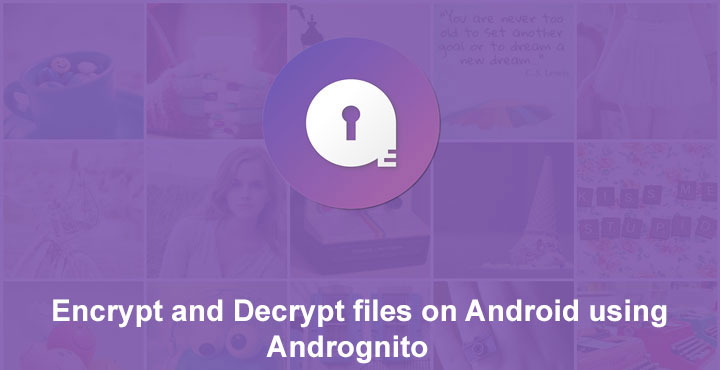 We have talked about encryption in quite a detail before, discussing why you should encrypt or not encrypt your SD card. The feature is made available by some OEMs although it is not a part of Android originally. Stock Android only lets you encrypt the phone memory. Encrypting your SD Card has one major disadvantage, that not even you, the owner, can read the contents on any other device. But why encrypt the entire SD card? What if there was a way to encrypt only certain files? That’s exactly what we’re going to show you – how to encrypt and decrypt files on Android using Decrypto.

But again, there’s one minor disadvantage. If you encrypt your SD card using your smartphone’s OEM-provided feature, like on Samsung Galaxy devices, you can still access the photos or music stored on the card via any gallery or music app as long as the SD card is in the same device. Encrypting specific files, however, requires the use of third-party apps and this hides those files. Meaning you won’t be able to see those photos or videos on any other app but the encryption app.

Also read: How to Fix PIN Errors After Restoring Nandroid Backup in TWRP

Now that you know what you’re getting into, let’s get to it. We will be using an app called Hide Files – Decrypto which uses AES 256-bit military grade encryption algorithm to securely safeguard your files. So the first thing you have to do is install the app from the Google Play store.

Read also: Malware on Android: The 5 Types You Must Know About

The app even lets you create different vaults to organize your files from Settings>Vault. There are quite a few options in the settings as well if you wish to explore including a Theme Manager which lets you completely change the look and feel of the app. It’s a welcome feature considering you might be spending a lot of time with the app if you use it extensively. There’s also a cloud sync option which as the name suggests syncs your encrypted files to the cloud so you can then access them using any device but it is a paid feature. You can upgrade to the pro version for just $3.7.

Overall we really like the app. The UI is quite awesome and the app itself guides you through each step, the animations are really cool. But what’s a cool app when it can’t function right? Fortunately, that is not the case here. We’ve tested version 3.2 of Decrypto for almost a day and it works as it promises. There’s one key feature that we couldn’t find and that is the option to select storage. This means anything that you encrypt gets stored on the internal storage of your phone and this can fill up space pretty fast. Other than that it is a really neat, well-polished app targeted towards the average user while still packing some advanced features.

Read next:  20 Google Maps Tips and Tricks You Must Know About