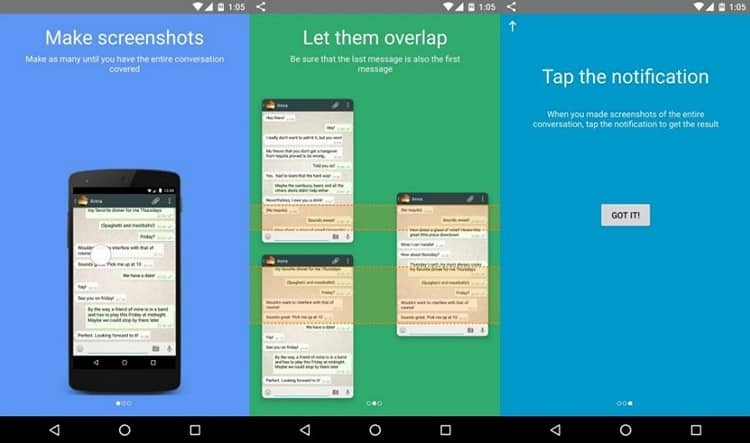 iOS has a very good screenshot stitching utility called Stitch It! It’s also one of the useful features included on Samsung devices. For other Android phones, there are multiple apps that let you merge multiple screenshots into a single image. While some apps let you click multiple screenshots and then stitch them in whatever order you prefer, some apps also let you capture scrolling screenshots. Using this feature, you can capture long conversations and web pages in a single flow. Here are some free Android apps that let you do this.

How to Stitch Multiple Screenshots

One of the more popular apps in this list, Screen Master lets you capture multiple screenshots. You will have to scroll up or down and capture the required pages, with a slight overlap. Once you are done, Screen Master will identify the entire thread (by checking for overlapping areas) and intelligently stitch all of them into a single, shareable screenshot.

Another useful app that lets you combine multiple images is Image Combiner. While Stitch & Share lets you stitch multiple screenshots vertically, Image Combiner will let you do that in both horizontal as well as vertical directions. However, this does mean that the status and navigation bars will end up in all the parts of your final image. Still, for a free app, it’s extremely simple and lightweight.

Scroll Capture for The Web

If you enjoy(ed) scrolling capture on a Samsung device, you will like this app. Just open a web page in the app, tap on the shutter button near the bottom, scroll, and repeat.

Read Next: Best Android Apps for Moms with Newborns