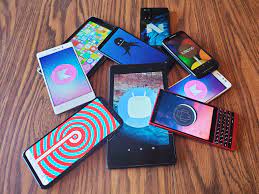 Every Android Easter Egg and How to Find It There are a ton of little twinks in the Android operating system for consumers and the developer community. One of the running longest-running jokes is Android’s venerable Easter egg.
What is an Android Easter Egg? Simply put, it’s a hidden feature in the Android operating system that you access by following certain steps in the Settings menu. There have been many over the years, from interactive imagery to simple games.

Here is a shortlist of all of the Android Easter Eggs and how to access each one. We’ll keep updating as Google adds new ones!

Before we start the list, you can basically experience all of the Easter eggs for yourself with this Android Easter Egg App on the Google Play Store. It has almost perfect replicas from Android 2.3 Gingerbread to Android 10.

Android had a pretty macabre first Easter egg. It featured the old Bugdroid logo next to a zombie gingerbread man in a scene that looks like Halloween. The story goes that the head of the Android framework team, Diane Hackborn, was friends with an artist named Jack Larson. Larson was taking portraits of zombies (like you), and Hackborn thought it would be fun to hide one in Android.
When you activate the Easter Egg you will receive a toast message letting you know the art is by Jack Larsen so you know who is to blame. It’s scary, it’s beautiful, and it was Android’s first Easter egg.

To access Android 2.3 Gingerbread Easter Egg:
Go to Settings> About phone, then tap the Android Version box repeatedly until the Easter egg appears.

Android 4.0 Ice Cream Sandwich was also the first multi-level Easter egg on Android. Not all versions had two stages, but some of them would go on.

To access the Android 4.0 Ice Cream Sandwich Easter Egg:
Navigate to Settings> About Phone, then tap the Android version box repeatedly until the Easter egg appears Press and hold the retro bug droid several times ( every time grow time to do this) to see stage two.

Jelly Bean was another two-tier Easter egg. The first stage was a colourful jelly bean graphic that was superimposed on your background image. When you tap the jelly bean, a cute smiley face is added. Press and hold the rubber to start the mini-game. There is no way to win the mini-game and it doesn’t make any real sense. However, you can touch and interact with the floating rubbers by throwing them across the screen.

This was also the first Android Easter Egg that was accessible from the Android version box. The Beanflinger game was actually a daydream, which made sense since Jelly Bean was the first feature.

This was remarkable for several reasons. It didn’t actually contain bug droid, although Google’s statue for Android Jelly Bean did. It also had a lot more interactive elements and that’s a trend we’re seeing in later versions of Android.

To access Android 4.14.3 Jelly Bean Easter Egg:
Go to Settings> About Phone, then tap the Android Version box repeatedly until the Easter egg appears. Lastly, press and hold the gummy bear (this may take a few tries) to start the interactive gummy bear mini-game.