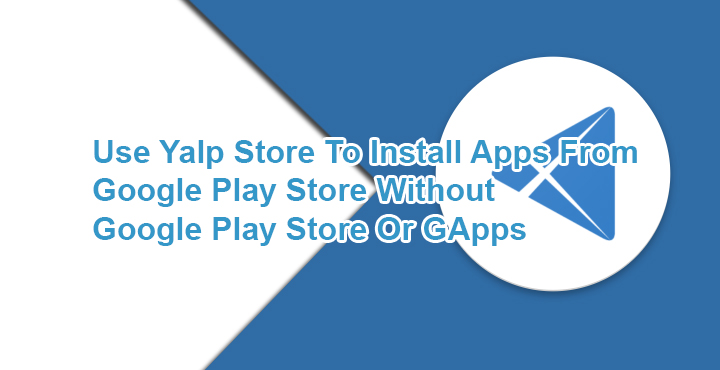 Android is an open-sourced software and fans would make sure that everyone knows that. It is after all it’s biggest advantage and might I say disadvantage as well. That is a topic for another debate though. But even though Android is open sourced, you can see Google’s fingerprints all over it, no matter whose version of Android you use. That is because while Google believes in free software, it earns from the services it provides. And without Google services, which include the Google Play Store, Android is basically crippled. Or it was, until somebody came up with the Yalp Store.

The Google Play Store is a part of Google Mobile Services or GMS. The GMS suite includes Google Cloud Messaging, Google Connectivity Services, and the much-maligned Google Play Services. If any company, organization or person wants their version of Android to have access to the Google Play Store, they will have to install the entire GMS suite on it. It’s all or nothing.

Generally, this has a not so good effect on a device’s battery and performance and this is well-documented. Most custom ROM developers make their ROMs available without the GMS suite for this very reason. It is up to the users to decide whether they want to go with the GApps and take a performance hit, or sideload every apk and update them manually. That’s not a very difficult choice, is it? So regardless, one ends up with the entire suit of Google apps just to make sure that they have access to Google’s huge library of Android apps.

Yalp Store is a free APK download available at the F-Droid website. It is a well-known website for open sourced projects that we can assure is completely safe. Just follow the link down below, scroll down to the packages section and tap download apk.

How to use Yalp Store

Once installed, open the app and you will be prompted to sign-in with your Google account. Don’t worry, no one is going to steal your login credentials. This is a local login and it is required because the Google Play Store requires a valid login token before it will serve up any APKs to download. When logged in, tap on the three dot menu button in the top right corner and select Settings. Here, you might want to change the Check for updates settings. It is set by default to check only when you launch the Yalp Store. It’s good enough for most, but it might be better to change it to daily.

If you do that, you get the option to Also download the update when found. If you choose to enable that as well, there’s also an option to Also install the updates even. However, that will require a rooted device which most probably won’t be a problem if you’re here. You may blacklist or whitelist certain apps for automatic updates.

Don’t miss: How to Disable or Turn Off Facebook Video Auto Play

There are several other nifty options that can filter out paid apps, or apps with ads, etc. The Google Play Store could definitely use some of these. Among the other options, you might want to enable Install apps immediately under the Installation section. This makes app installation as seamless as it is with the Google Play Store. Otherwise, Yalp Store will only show you a notification when an app has been downloaded. You will have to tap the notification and manually install the app. Somehow that doesn’t seem like a thing you would want to do every time.

Read Next How to Install APK Using ADB Commands