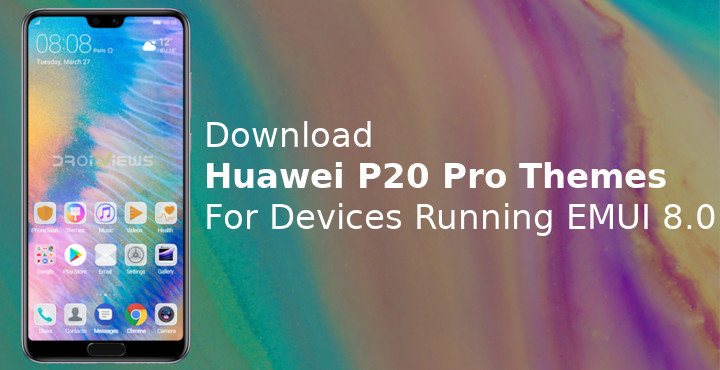 In case you missed it, Huawei has announced the next flagships in its P series of smartphones in Paris. The P20 and P20 pro are both camera-centric smartphones like their predecessors, with a new AI approach to the camera that we’ve seen before from the company. The P20 and P20 Pro cameras retain their Leica branding since Huawei says they’ve been co-developed with Leica. Both the smartphones have the 18:9 FullView display and also have the now popular notch. If you want, Huawei lets you turn off the notch in the settings, which essentially means reducing your display to use only the portion below the notch. With the new phones, as tradition demands, Huawei has brought some new Huawei P20 Pro themes and wallpapers that are also found on the Huawei P20.

The main highlights and the biggest difference between the Huawei P20 Pro and the Huawei P20 is the camera setup. The regular P20 has the now common dual camera set up on the back whereas the P20 pro now has three camera sensors on the back. We’re not judging yet but at least according to DxOMark, the P20 Pro camera seems to be slightly ahead of both the Galaxy S9 Plus and the Google Pixel 2/XL. Both devices are running on the latest version of EMUI that is EMUI 8.1 based on Android 8.1. The devices are powered by the same octa-core Huawei HiSilicon Kirin 970 SoC which comes with a dedicated NPU. The regular P20 has 4GB of RAM while the Pro version has 6GB, while both of them have the same 128GB internal storage.

Along with these phones, the company also launched Huawei Share 2.0 which should probably make its way onto more devices with the update to EMUI 8.1. It’s essentially a wireless file transfer service between Huawei and Honor devices. This also works between a Huawei/Honor device and a Windows or Mac PC. Coming back to what we’re here for though, the themes from the Huawei P20 Pro. We’ve already made the Huawei P20 Wallpapers available, and today you can download Huawei P20 Pro themes.

These are Huawei themes plucked right off the Huawei P20 Pro firmware. Hence, you will need a Huawei or Honor device running Android Oreo. In other words, you’ll need a device running on EMUI 5 and 8 to be able to install the themes. These themes have been extracted by XDA Senior Member LastStandingDroid. If you’re using a Huawei or Honor device and you’re into modding and ROMs you have most probably heard the name before. LastStandingDroid has extracted the themes from a leaked P20 Pro firmware and made them available to download for anyone. These aren’t APK files that you can install and be done with but installing these themes is not any more difficult than installing an APK.