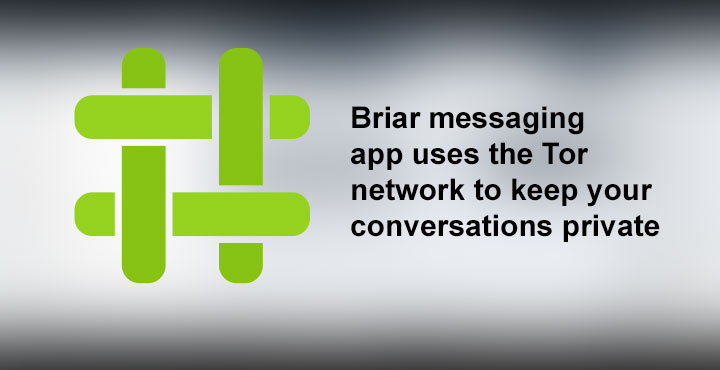 There are already many messengers out there in the world, and quite a few of them support an end to end chat encryption. This ensures that only you and the person you’re talking to can read your messages. But Briar, a new messaging app from Briar Project, has a different approach to privacy centered messaging. You may not have heard the name before but Briar has already generated a name for itself among privacy enthusiasts as the Darknet messenger.  It uses the Tor network to send and receive messages, which is a free volunteer network. The app has just entered the beta stage but you can already install it from the Google Play Store as an early access app.

Apart from the use of the Tor network, there are a few other specialties to the new app. For one, you sign-up with a username instead of your phone number. All communications are end-to-end encrypted, use forward secrecy, and don’t carry any metadata. Some might say that is quite important. Briar is also unaffected by censorship because there are no central servers that a government can block to take down the entire service. Under the hood, Briar uses a peer-to-peer system with no central servers to relay information. What this means essentially is that the participants in a conversation are exchanging messages directly with one another. The messages are not first going through servers which is the case with WhatsApp and other messengers.

In the event that your Internet goes down, Briar can use Bluetooth or ad-hoc Wi-Fi to send encrypted messages. The official Play Store page for the app describes it as a “messaging app designed for activists, journalists, and anyone else who needs a safe, easy and robust way to communicate.” It wasn’t just luck that the app is prepared for the lack of an internet connection.

Must read: How to Disable Emergency Cell Broadcast Messages on Android

Although it is a messaging app, Briar does not just end there. It also has a Blogs section where you can write and follow blogs, even import your RSS feed.

An app centered on privacy is no use if it is easy to break into. Therefore, before being available on the Play Store Briar underwent a security audit by security firm Cure53. All reported problems have been fixed as per the report that says, Briar’s cryptography “was found to be exceptionally clear and sound, with no vulnerabilities spotted.” If you’re really curious, you can read the entire report here.

There are some drawbacks to all of this though

With an app focused solely on privacy, come a few annoyances. For instance, you can only add contacts by scanning a QR code off their device’s screen. Screenshots are also blocked on the app which is not surprising. But what all that adds up to is that you can’t add anyone who you can’t physically reach. Sure you can try taking a picture of the QR code with another device and send it to someone but we’re not sure if that’ll work. It can sound bizarre but this is all done in the name of security.

Also, it seems you would not be able to use the app for more than 88 days with the same account. When you sign in, it displays a message at the top that says, “This is a beta version of Briar. Your account will expire in 88 days and cannot be renewed.”

Also read: Telegram and Whatsapp: The Modernized One vs the Conventional One

And it doesn’t end there

All the grievances aside, the ultimate downside to Briar is that it requires a constant connection to the Tor network. This, it achieves via a persistent notification which as you might have guessed is not very battery friendly. As of now, you’re probably better off with whatever messaging services you’re using unless you really need the absolute tightest security.

The app is also not expected to be out of beta very soon. Briar is an open-sourced app without a commercial backing, hence lacks strict deadlines. Nobody is in a hurry to release an app and tick a check mark. The developer has confirmed that there are plans for a desktop app in the future. Currently available only on Android, Briar should also be available for iOS but that’s not happening anytime soon either. Mainly, because iOS, unlike Android, isn’t open. The restrictions on background apps and services are tighter which isn’t very great for P2P apps such as Briar.

[googleplay url=”https://play.google.com/store/apps/details?id=org.briarproject.briar.beta”/]
Read Next 25 WhatsApp Tips and Tricks - Use WhatsApp Like a Pro